Since January 2018, Anna Karina Nava and her team have been working on Open Banking here at iwoca. We caught up with her to understand what exactly Open Banking is, its benefits and what the future will hold.

Hi Anna; it’s great to chat. As a quick recap, could you please explain what Open Banking is?

Well, for a number of years certain banks processes have been recognised as being quite outdated. The consequence of banks not being innovative enough is that consumers can’t access the right products. As a result, consumers try to go with an alternative provider instead, but then they experience difficulties gaining access to, and using their financial data outside of their bank’s ecosystem. As a result, they tend to defer back their bank’s own imperfect product, or worse, no product at all.

The British Government presented a report after thorough research from the Competition and Markets Authority identifying that this lack of competition for SME lending is not working well for customers; banks having limited incentives to compete in BCAs or SME lending on either price and quality. As a result, Open Banking was born – a standardised process banks must adhere to in order to allow you the use of your financial information with other providers. The agreement also ensures the security of the user’s data and transparency as to what it will be used for.

Let’s jump into iwoca’s Open Banking project. When did it all begin?

Early on, we participated in the Nesta Competition for innovative solutions, which was the predecessor of Open Banking. It was actually like an Alpha Testing of the Open Banking’s API, in a very rudimentary way. We were one of the winners of the first stage, by showing how we would be able to give a more accurate credit decision, based on reliable data, by pulling bank transactions from different banks.

In January 2018 we started the Open Banking project inside iwoca. It has been a team effort, as it was the very first time anyone had tried anything like this in the country. As part of the first wave of developers, we were the guinea pigs working out how the standard would actually work in practice.

How was this initial starting period?

The Open Banking Implementation Entity (OBIE) was really helpful in terms of setting up periodic working group calls, with developers across different companies and banks talking through together the issues they were facing. Once a week we would have a call and if someone was having a certain issue they would share it there.

On the bank side, we started working with Lloyds and in parallel tried approaching a couple of others. This proved difficult: despite much publicity to contrary, many of these big multinational banks apart from Lloyds didn’t even have basic documentation on their website.

So these other banks were sending us supposedly already-created information ad-hoc by emails and we were like, “This is going to take forever.” Most of the big banks were not ready in January 2018 like they said they’d be.

Are they ready now?

Apparently so, yes! Some conversations are still frustrating but they are making progress, albeit slowly.

What are the advantages of Open Banking?

In that situation, we would only review three months of bank statements and – because you’re asking for finance – these would likely be your worst months because you need to cover a cash flow gap until the good season starts. That’s very unfair.

Pushing the big banks is fun. They should be the ones doing this kind of innovation, but right now they aren’t.

From iwoca’s perspective, Open Banking means we’re able to give better credit decisions. We can pull several years of statements, not just three months, from a reliable and unalterable source – the company’s bank – and as a result make incredibly accurate credit decisions. These decisions are based on the best data we can possibly acquire, not assumptions and or limiting to credit scores (like with other lenders).

How secure is it?

The Open Banking standard defines what security is in place for the consumer. Neither ourselves nor any other third party provider ever have access to a customers credentials. We will only ever have a ‘virtual token’ that the customer give us consent to use and which can be revoked at any time.

On top of that, we can only use the data for the purposes that the customer has consented it to be used for, which in our case, is reading bank transactions. So from that point of view Open Banking is very secure. 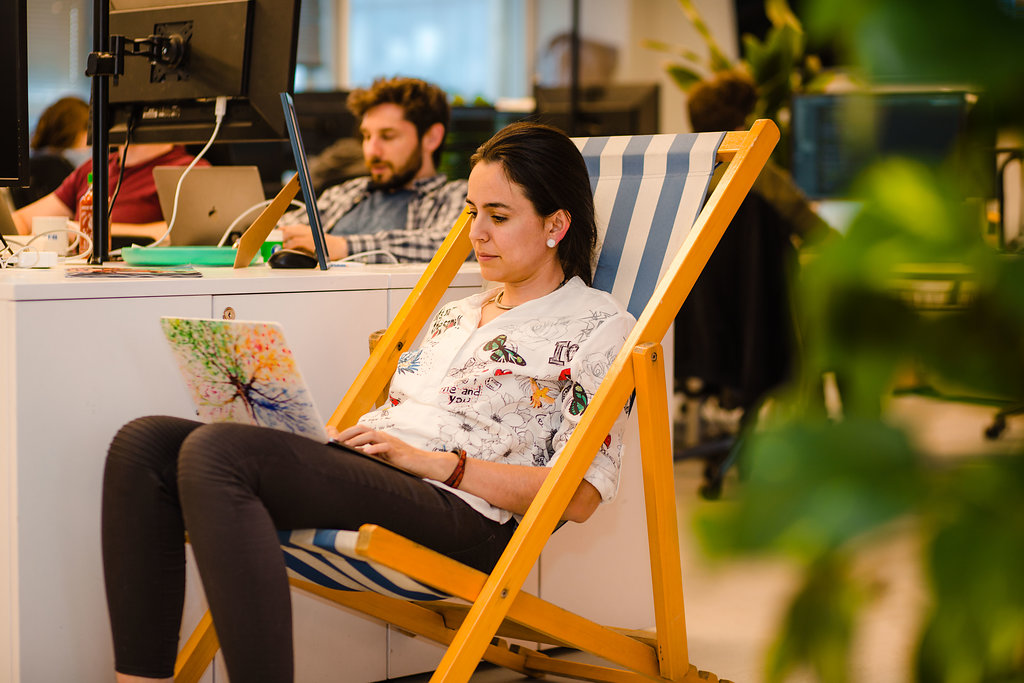 Anna at work in the iwoca office.

How do you feel having worked through Open Banking from the very beginning to a point where you are ready to launch?

It is very exciting because it’s a project that not only benefits iwoca, but also for every company and consumer that uses Open Banking in the future. Our problems and solutions feed back to the wider Open Banking group and helps set the standard for the next iterations of the standard.

Plus, pushing the big banks is fun. They should be the ones doing this kind of innovation, but right now they aren’t.

Last question. Where do you think open banking will be in five years’ time?

That’s a very good question. I hope that – with continued input from the Third Party Providers like ourselves, from the banks, and if we all do our homework – in five years’ time Open Banking will be as common as Connect via Gmail Login is today.

However, there’s a lot more that can be still done with Open Banking before then. From arranging payments via your mobile, to organising finance from multiple providers all in the same location; at the moment, we cannot even dream about having these functions. This is because the banks are not offering them, and they’re the only ones who can make these features a reality.

So that’s the barrier right now; I hope in five years’ time they won’t be there. I guess that’s it.

Anna Karina Nava Soriano was born in Venezuela and lived there until she moved to Europe, aged 17, to study software engineering. After a successful career in telecommunications software in Spain, she came to London looking to learn from the culture, the big city environment and the fintech movement. She began working at iwoca two years ago.

Jamie Maddison has written for a range of publications including Lonely Planet, Geographical, Diplomat, and Hidden Europe.