“You can’t just sit around and hope that someone will make the world better for the next generation” – iwoca customer Cynthia Davis, CEO of BAME Recruitment, on inspiring social change.

Of the hundreds of people that BAME Recruitment have placed across the UK, 68% are BAME, 58% are women, 20% identify as LGBT and 5% have a disability. Cynthia Davis runs the company – a recruitment and consultancy service that not only aims to create diverse and inclusive workplaces, but also seeks to effect real social change.

Cynthia has been in the recruitment sector for 20 years and while her company is just four years old, it has already worked The House of Commons, Comic Relief, The Mayor of London and Stonewall – but things were very different when she started her career at one of the UK’s top recruitment agencies.

“I remember my first day out of education, walking into an office, I felt like I’d walked into Narnia,” Cynthia says. “There were 120 employees and out of all of them only five were women, and I was the only person of colour.”

“As I progressed through my career, if I didn’t get promoted for certain roles it made me question – is it because I’m a woman? Is it because I’m a woman of colour? The only way that I was able to move up the ladder was to move out of unsupportive organisations and find the organisations that would value and promote me. I was always having to push and push and I thought: ‘it shouldn’t be this hard.'”

‘We had to break the cycle somehow’

Cynthia knew people of a similar background to her who were also struggling with their own careers, and who felt they were fighting a biased system. But the full reality of what this meant for future generations became clearer after she became a mother.

According to data from the Office of National Statistics, as of 2018 women in full time positions are paid 8.6% less than their male counterparts, while the gap between men and women across all work is 17.9%. London currently has the widest ethnic pay gap, with people of ethnic minorities typically earning 21.7% less than white employees.

“And I thought, this just isn’t good enough,” Cynthia says. “As a society we should be doing better, we can do better.”

Using what you know

Cynthia decided to take matters into her own hands with what she knew best – recruitment.

“You can’t just sit around and hope that someone will make the world better for the next generation: you have to be a part of that change.”

A natural networker, Cynthia started from her kitchen table, connecting talented people with organisations looking to fill positions. She was determined to break the cycle of employers hiring talent based on where they went to university or their backgrounds, instead of what matters – their skills and potential.

“I had access to some fantastic talent who came from all walks of life and all kinds of backgrounds,” Cynthia says. “For me, this was personal and if I could help make a difference in one person’s life then that would make my efforts worthwhile.”

“Then one day, someone said to me – ‘you’re already doing it, why don’t you set up your own business?’” 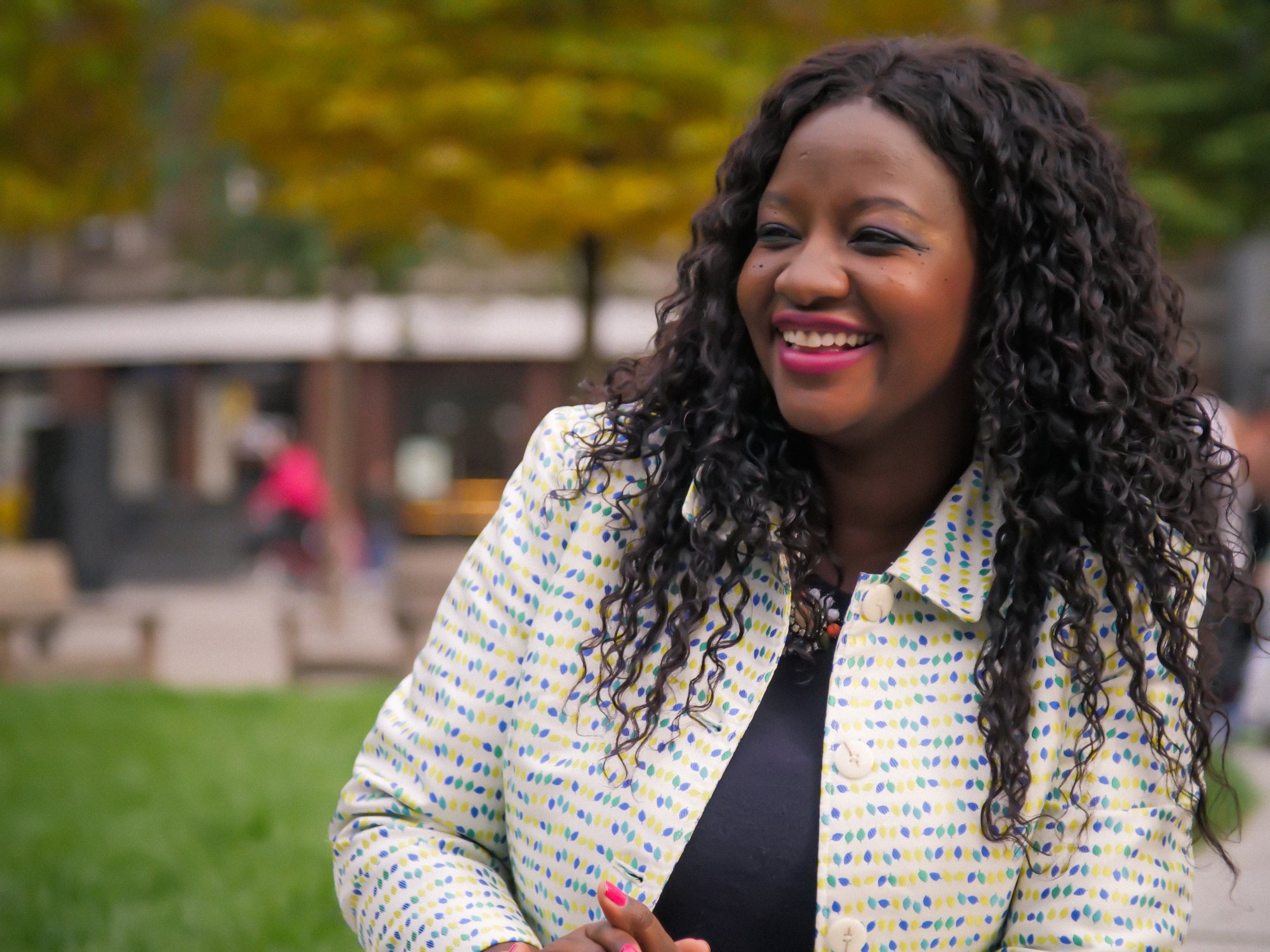 The benefits of a diverse workforce

Today, BAME Recruitment has 10 employees and are steadily growing to meet the increase in demand for their services. For Cynthia and the team, this work is far more than just a 9 to 5. It’s about ensuring that businesses are proactive in creating work environments that make individuals feel valued for who they are, regardless of their background.

“The word ‘belonging’ is so important,” Cynthia says. “The culture you want to create is one that makes people feel they should be there because they’re the best person for the job. This helps to eliminate imposter syndrome or any feeling that they don’t deserve to be there.”

It’s also essential that the organisations they are helping are recruiting inclusively for the right reasons – not just as a tick box or to appease stakeholders, but because they see the real value in having a diverse workforce. Cynthia says, “Diversity is not as simple as recruiting people who look different.”

“To quote Vernā Myers,” Cynthia says, “diversity is like being invited to a party, inclusion is being asked to dance, equality and belonging is being on the party planning committee!”

Diverse teams have been proven to be more effective in problem solving, decision making and creativity, while also reducing employee turnover and increasing profits. Having a team with a variety of different perspectives and experiences equips businesses to approach problems in innovative ways.

“If you can create a culture where everyone feels welcome and can thrive, then you will succeed,” Cynthia says. “While 62% of our successful candidates have been from an ethnic minority background, 32% have been straight, white, heterosexual males. We don’t exclude anyone: it just ensures the process is fairer and more representative.”

Education, role models and the future of social change

Consultancy and training play a large role in the work that BAME Recruitment does – teaching other businesses how they can develop working cultures that foster a sense of belonging. But Cynthia has also identified education as a sector that is key to making a difference.

For children and young adults, having role models who they can relate to, and who look like them is essential to enable them to see their full potential. Of the different sectors that Cynthia works with, the education sector is one that is still lagging behind in terms of equality. According to data from Advance HE, in 2018 of 18,940 professors at UK universities just 115 were black, while in 2016-17 just 6.7% of university staff identified as BAME.

Cynthia mentors young people as part of the Transitions Program for the Stephen Lawrence Charitable Trust, set up in Memory of Stephen Lawrence who was murdered in a racially motivated attack in 1993. The trust 'transforms the lives of young people from disadvantaged backgrounds aged 13 to 30 to achieve real social change and to inspire and enable them to succeed in the career of their choice.'

“You cannot be what you cannot see," Cynthia says. "It breaks my heart when I talk to young people about their aspirations, especially in inner city schools, because they don’t always have access to role models that look like them and that they can look up to.”

“Recently, I saw a photo of Lord Simon Woolley and two other BAME women in the House of Lords, and I thought ‘wow’, just a few years ago that would never have been imaginable, What does this do for the younger generations? It makes them think: ‘If these people are in that role, that means I can achieve that too.’”

“I cannot stress enough how important it is for businesses to have internal networks.” Internal communities are important for fostering a culture of belonging and giving individuals a voice. They are more than just social interaction for people from certain demographics – they are a form of empowerment. They give them a collective voice to help shape and change their work environment for the better.

“It’s ok to ask what it’s like to come from a different background.” Open dialogue creates safe places where people feel comfortable enough to ask questions about somebody’s culture without judgment or fear.

“It’s about listening, taking action but also being accountable.” Leaders need to measure whether their actions have an impact on their employees. It’s also important to consider what else they can do if something isn’t working.

“It doesn’t matter if it’s not directly affecting you, you can still play a part in making that difference.” An ‘ally’ is someone who supports a cause regardless of whether they are affected by it. Campaigning for equality isn’t something that is reserved for those who are disadvantaged, but can be supported by all.

The future of BAME Recruitment

With October being Black History Month, Cynthia’s schedule is packed full of events she's talking at for companies like Pearson, eBay and Peabody Housing Association. She also delivered a Keynote at the Women in Business Expo, alongside Lady Karren Brady & Lady Michelle Mone.

But while it’s important to celebrate the wealth of ways the Black community has contributed to the Western world, Cynthia is keen to stress that it should not be reserved for just one month of the year.

“We don’t want to be seen only celebrating this in October, we want to go beyond that,” says Cynthia. “This should be something we talk about and celebrate all year round. It needs to become an everyday thing and part of our DNA.”

For Cynthia, her team are more than just recruiters – they're social change campaigners.