Not all that long ago ‘street food’ meant a hot dog at the fair, smothered with overdone onions and served from a rusty metal handcart. Today’s street food offering is infinitely more sophisticated — and more lucrative.

According to industry specialists MCA, the UK street food market has consistently grown quicker than the fast food market, albeit from a much smaller base. Early indications suggest that street food topped a total value of £1.2 billion in 2018, up more than nine per cent on the previous year. That’s a lot of falafels and wraps.

Northerners in particular have embraced the street food revolution. From themed events and festivals to pop-up venues and permanent clusters, there are more street food businesses in the North of England than you can shake a stick at—and nowhere more so than in Manchester. As the city’s fine dining offering has grown dramatically over the past decade, so too has its selection of gourmet street food and craft beer outlets. Jason Bailey is director of GRUB, a street food events company based in Manchester. Why does he believe that street food is so popular in the North?

“I think for the same reason anybody embraces street food. When it's done right it's top quality food served at an affordable price at a welcoming, unpretentious location, and it fits nicely into the upsurgence in caring about independent businesses.”

In Manchester and its suburbs, a number of dedicated street food communal venues have opened during the past couple of years. Among them are Mackie Mayor, housed in a Grade II listed market building on the edge of the city’s trendy Northern Quarter (set up by the street food businesses who created the award-winning Altrincham Market), and Hatch, a mish-mash of former shipping containers on Oxford Road.

Owned by commercial property company Bruntwood, Hatch has been a big success in a short amount of time. But why choose Manchester for this project? 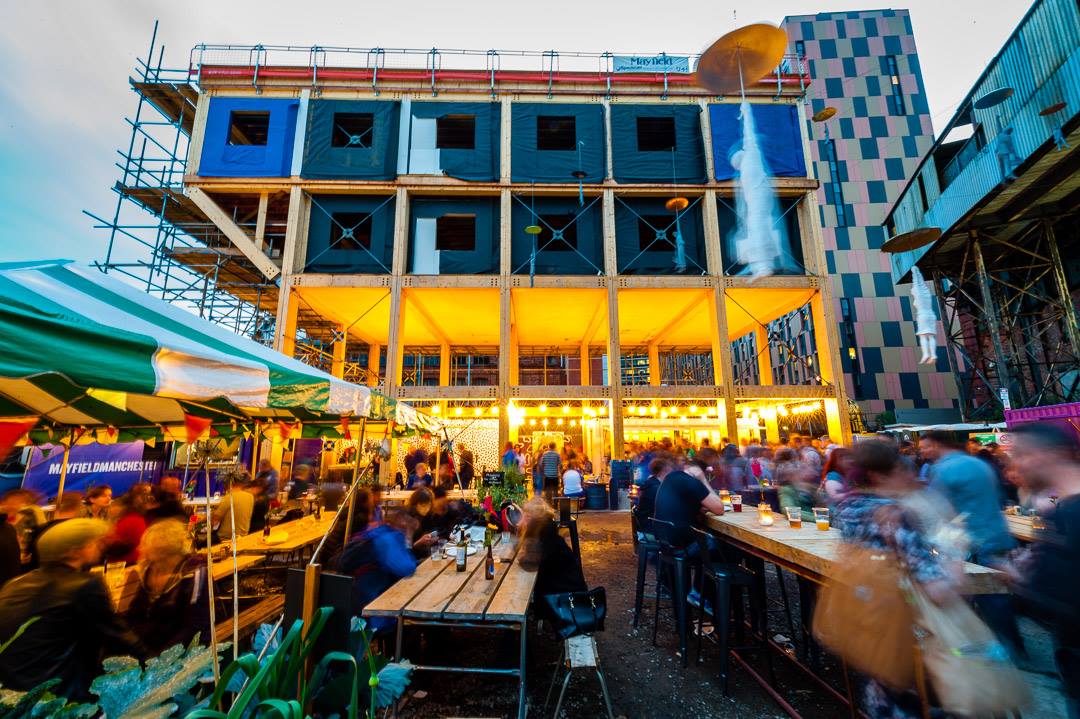 “Because Manchester is the food capital of the North and a city known for its innovation,” says Andrea George, head of retail and leisure at Bruntwood. “The concept is innovative—it’s about providing incubation opportunities for small businesses. We provide an affordable spot in central Manchester for them to build their business, garner more fans, and sometimes even test out a concept for the first time. This works for us too, as it makes for a more diverse and exciting mix of food, which in turn creates a destination.”

Phase two of Hatch is coming in late March. At that point, the space will treble in size and become part of a new creative business hub area. “There is also potential to take Hatch to other cities once the model has been perfected,” says George. “We are a start-up business ourselves with Hatch, so we're learning all the time.”

Like some other similar ventures, Hatch is home to a mixture of street food vendors and retail, all situated around a main courtyard. That’s one of the most appealing aspects of these new street food hubs in the North: the central eating and drinking area. James Tabor is general manager of Assembly Underground, a new street food and craft beer venue in Leeds which opened its doors last November. The seven traders are located in a fully-refurbished basement space within a Grade II listed building in the city centre,

“Eating in a space like Assembly Underground is a democratic way to have fun,” he says. “Within a group of diners, each person can eat exactly what they choose to rather than all having to settle for one type of food or a single cuisine. The options to share are plentiful, and prices match the quality of the offer. The same goes for drinks. Other than the staggering selection of craft beers on tap (50 different lines), there are libations to suit everyone in two very different spaces—one a tap bar, the other an intimate speakeasy.”

Assembly Underground’s co-founder, Richard Sweet, believes that the recent surge in street food is due to a combination of factors.

“Throughout the country there is a move away from more formal dining, which is often expensive and not always of the best quality. People are tired of the same old high street options and are looking for something different. Street food offers more choice, greater informality, and a more relaxed experience. Plus, it’s often better quality. Combine these factors with the North’s strongly independent spirit and you have an environment that’s very receptive to embracing street food.”

Slap & Pickle are one of Assembly Underground’s seven businesses, serving top quality burgers and haute hotdogs as well as a variety of vegan options. Co-owner Zoe Perrett says that cities like Leeds and Manchester have an ingrained independent culture and will strive to support indie businesses over large corporations.

But, as small business owners and start-ups know, running your own company isn’t a walk in the park.

“Having the self-discipline to take charge of every single aspect of the business is a massive one,” says Zoe. “When you own a street food business, you are an accountant, a chef, a designer, a copywriter, a host, a van driver, a runner, an event organiser, a firefighter and a million other things. The biggest misconception about this job is that it’s just about turning up and cooking food. You have to be prepared to sacrifice your social and home life, there’s no nine to five. The times the rest of society is out revelling are the times you’re making your living.” 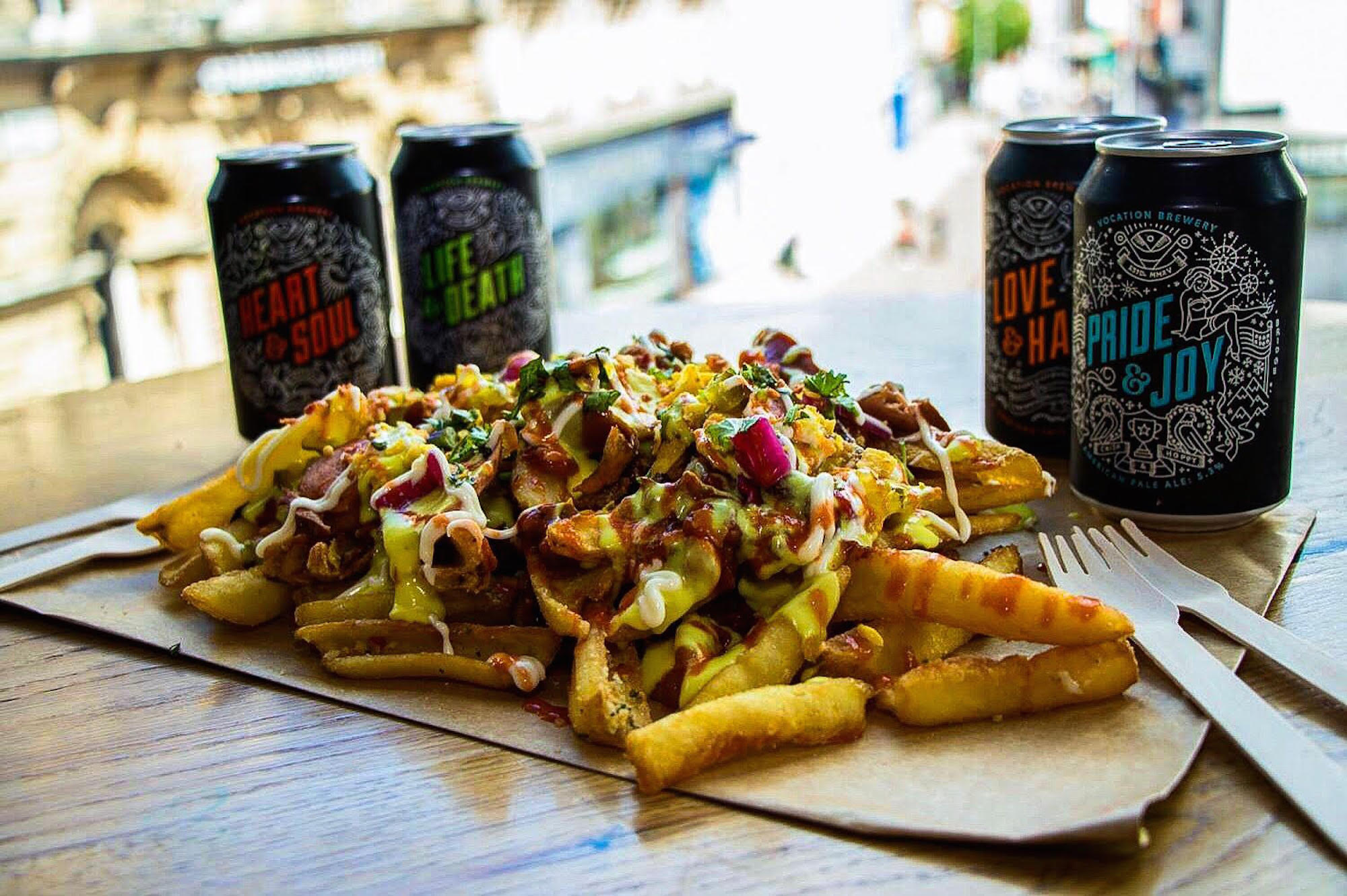 Nevertheless, the hard graft and long hours aren’t putting people off. Street food businesses are thriving across the North of England, including in the North East. Last year saw the opening of so-called ‘container villages’ next to the Tyne Bridge in Gateshead and in Newcastle city centre. In the latter, called Stack, vendors include Mexican street food specialist Los Cocos, and Stixs which dishes up Asian meals.

What’s on the menu?

People seeking a traditional burger and fries from street food vendors in the North will find plenty to satisfy their appetites. But there are other exciting prospects, from crispy pigs’ tails in Gateshead, Korean fried chicken in Newcastle, Taiwanese steamed buns in Manchester, cassava fries in Leeds, and Himalayan cheese on toast in Liverpool. The world is your oyster. And you can buy oysters too.