This memes war: the balancing act of marketing with memes

Tapping into the buzz of social media appeals to many business owners. We unpick the potential of marketing with the meme, and consider: is it worth it?

Creating a perfectly timed meme filled with cultural nuance is contrary to the carefully planned nature of traditional marketing practices. That said, if done properly, memes can earn your content the clout of becoming a viral internet sensation, with the increased brand awareness that comes with it. In short, a well executed marketing meme can spell sweet, sweet internet glory. But it can also go horribly awry. So, is it worth the risk?

In the digital age, a meme is popularly recognised as a type of media - photo, or short video – usually overlaid or supported by text, which touches on social and cultural tendencies to garner shares and – in the process – internet acclaim.

If that sounds simple, you should know, it isn’t. The internet is a weird place, and even the smartest marketing minds have been known to succumb to its many traps. So, we’ve outlined some lessons learned from the brave companies who have attempted to tame the meme.

Stay authentic to your brand

As with any other form of marketing, if it doesn’t make sense for your brand, don’t do it. That isn’t to say memes are reserved solely for the techies and influencers of the world. On the contrary, the best business memes use broad cultural or social topics, often unrelated to the company itself, which is tied back to the business - its industry or product - in a smart way. It doesn’t matter what your business specialises in, if there's a clever link to your brand, consider giving it a go.

For example, M&M’s long-running talking chocolates – sarcastic Red, scatter-brained Yellow, stylish Green, suave Blue – have been present in more than twenty years of the brand’s advertising, and are taking on new life through M&M’s UK’s current online campaign. With the final season of Game of Thrones airing in April and May 2019, M&M’s UK took to Twitter with memes offering thoughts on each episode. Fans complained that the third episode of the season was so dark they could barely see what was happening on-screen, so M&M’s UK tweeted the below. 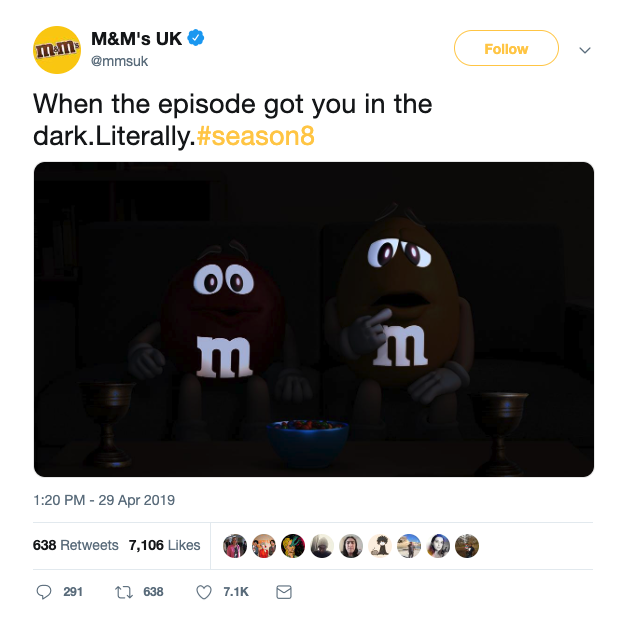 True to classic M&M’s branding, this meme reaches its audience with timely, low-key pop-culture references made by the walking, talking versions of the product itself. It works. But when building a marketing meme, you should be very careful not to crowbar in your brand.

The art of subtlety

Tech savvy consumers tend to be critical of ad content. They know you’re targeting them, and they usually don’t like it. But this isn’t the end of digital marketing. Clever marketing can help brands reach consumers via unexpected and entertaining content. Cue the meme.

Brand memes rely on stealth marketing. They gain popularity through likes, shares, and re-tweets, which spreads the content from one person to another. Consumers are more likely to trust content if it comes from within their social network, but less likely to share it if they feel like a product is pushed on them. So, how do you strike a balance?

As demonstrated by Spotify, subtlety is key. The music streaming giant promotes their pre-built playlists with memes that represent the mood they’ve tailored the playlist to. For their ‘Just Smile’ playlist, they’ve added a degree of topical relevance by celebrating the much anticipated birth of the royal baby, Archie. The resounding message is about the relatable feeling of fielding unwanted suggestions from the in-laws; take a deep breath, and just smile. 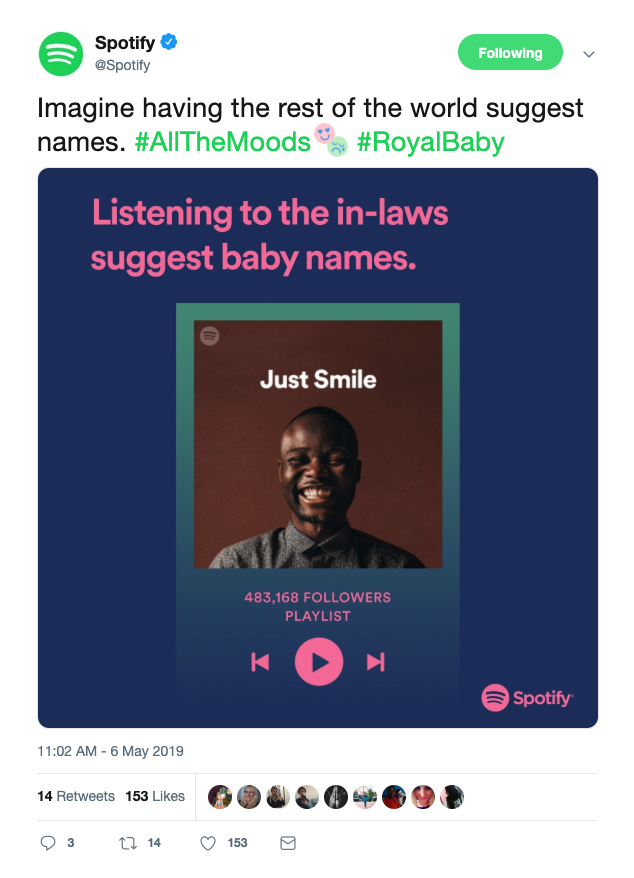 So, if you nail the cultural relevance and subtle branding of the meme, then it’s sure to be a hit, right? Wrong. As with any internet sensation, business memes can take on a life of their own.

Once it’s on the internet, it’s out of your control

As soon as you send anything into the internet abyss, you lose control of the message. That’s true for most marketing modes, but it’s exacerbated on the internet. Wily social media users are quick to catch culturally off-kilter content and eager to roast any brand guilty of posting a half-baked meme. Social media may give you access to a seemingly endless audience, but it also gives that audience the power to misinterpret your messaging.

If you’re going to give the meme a shot, make sure you’re clear about who you’re trying to reach, and build a message that they’ll be receptive to. Memes work best when you touch on shared feelings and emotions, but be careful not to alienate your customers in the process. Remember, memes are a great way to demonstrate that you and your company are in-touch with rising cultural trends, but will always be a risky choice due to the mercurial nature of those same trends. What’s popular one moment, may be outdated the next.

Understanding broad social trends can be expensive and time-consuming. Instead, keep tabs on the preferences of your current and future customer base to help ensure you’re producing the right content to help your company grow. After all, they’re the best indicators as to whether marketing with the meme is a good idea for your business.

So, should you dip your toe in the murky waters of meme marketing? That, unfortunately, can only be decided by you.

10 ways to achieve e-commerce success
Food for flow: how to fuel for a productive business day
How do I buy a business?