Over the last forty years, artist Doreen Fletcher has captured scenes of small business. In this intimate account, she looks back on her life, the language of shop windows, and why she’s still painting when everything else has changed. 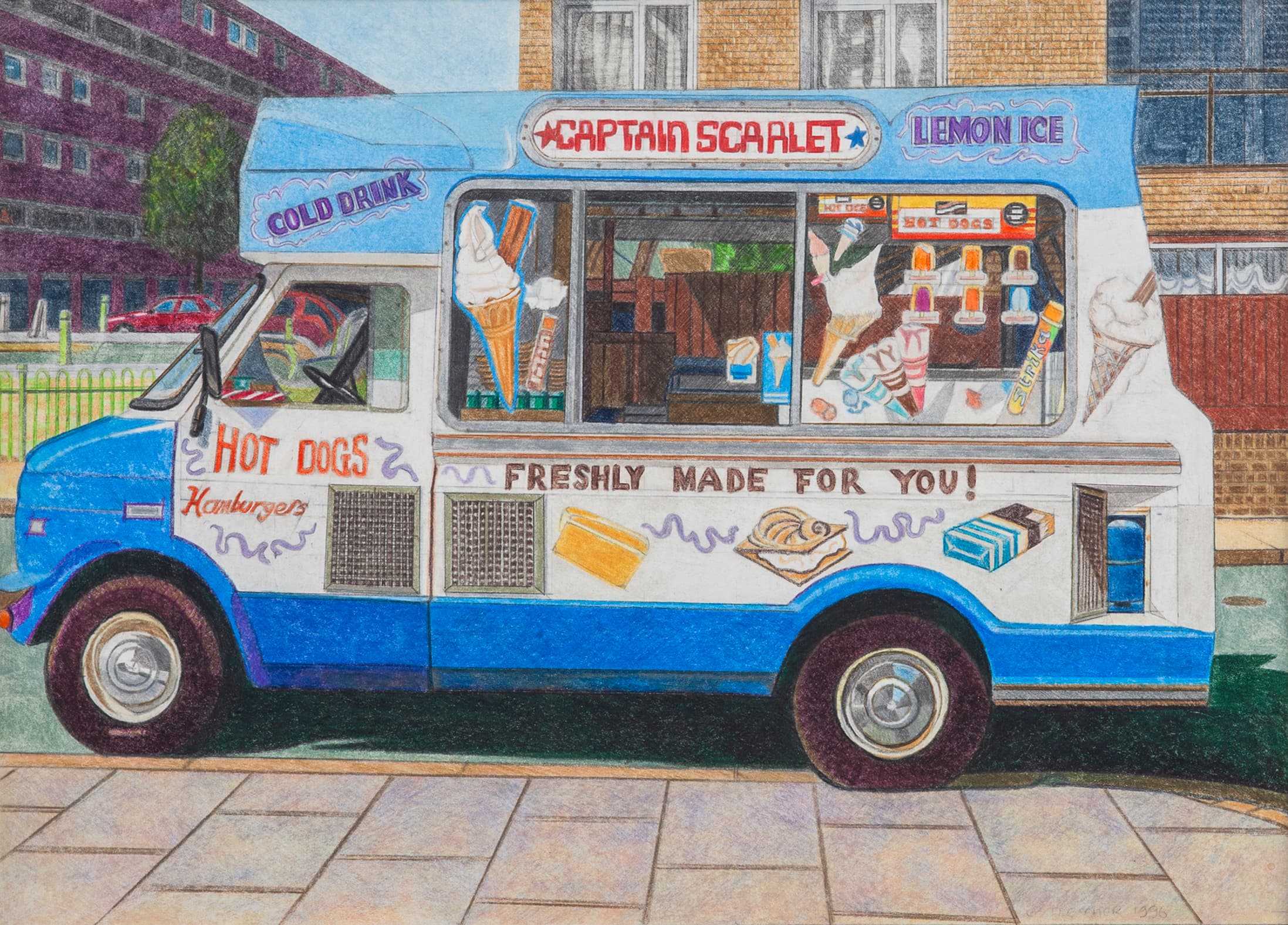 What could I possibly tell you about me?

Well, I grew up in the Midlands: only child; working class family; Coronation Street-type houses. I was lucky to be, I suppose you'd put it, unusually bright. I was also lucky in that my parents recognised this and allowed me free reign when it came to books. They could hardly read or write themselves but they used to buy me big encyclopaedias and that’s where I first saw paintings, proper paintings. That and on the back of Daz packets too - Van Gogh’s ‘Sunflowers’ and Constable’s ‘Hay Wain’ spring to mind.

In those days, the late 50s, they used to give away posters of famous paintings with cereal and washing powders. That was my introduction to art, and it made me want colour. There wasn’t much colour where I grew up, grey and brown in the back streets, although my dad used to take me to a toy shop every now and then – a very small business, run by Miss Waite – a spinster, always wearing a pinny, with a severe bun and red cheeks. Miss Wright always smiled when I came in, because she knew I’d want the most expensive materials. That was my childhood really – chasing colour and dreaming of open spaces. 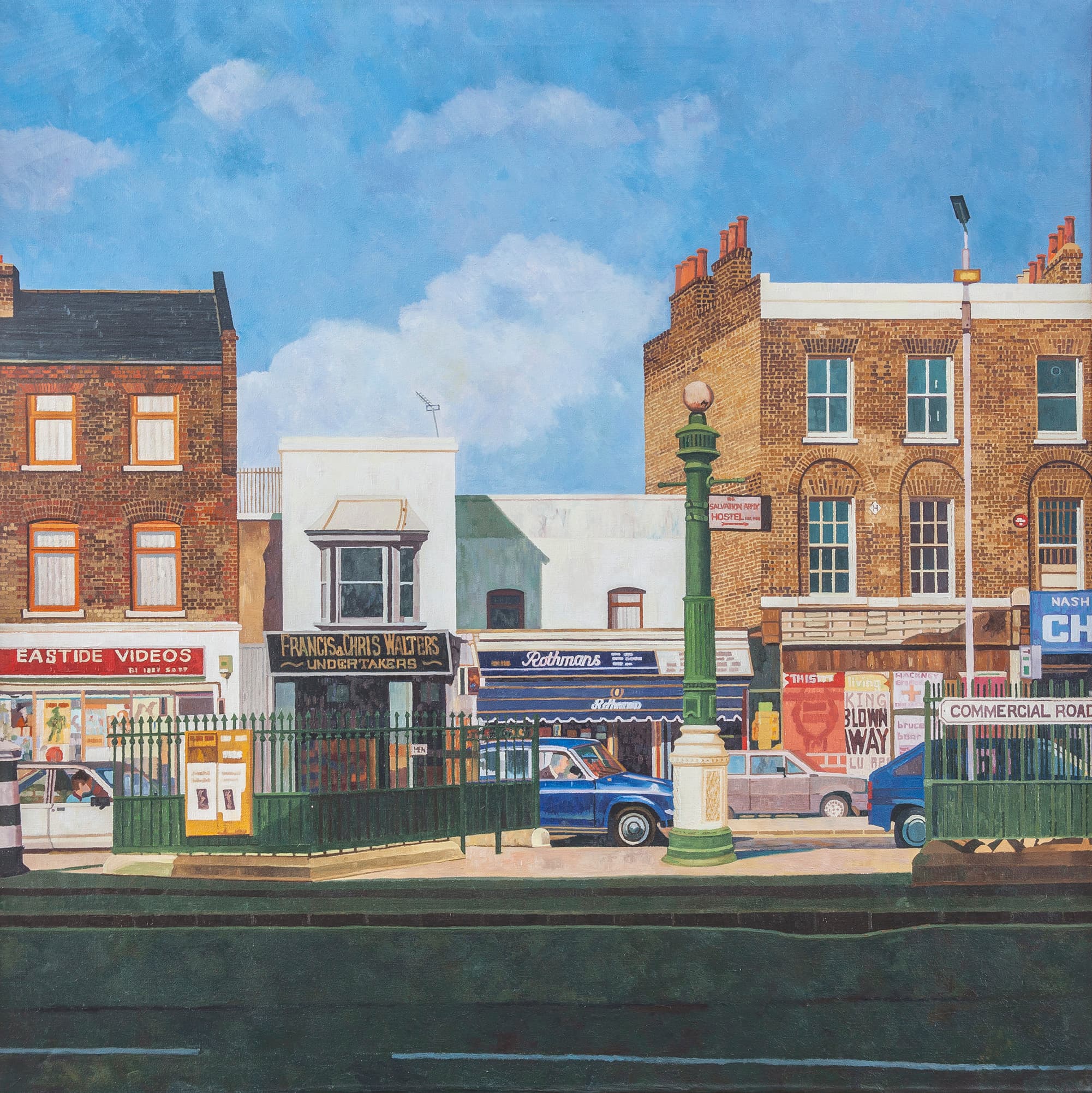 I ended up quite the rebel. I’d gone to grammar school where I achieved good A level results followed by art foundation school, where for the first time in my life, I found a group of good friends, a social life, a place where I felt right. I had a relationship, my first serious one – 19 years old – with someone who’s still a very close friend. The following year we came down to London together. He'd got into art college and I’d got thrown out of my foundation course for not doing any work.

I disapproved of degrees, diplomas, but Steve didn’t – it’s one reason we drifted apart after five years. But I did go on to do a non-accredited art course in Croydon. That’s where I met Gerald, my first husband. He was 30 years older than me – although that wasn’t why we broke up. Even though so much older, Gerald was the perpetual adolescent. He died last year, and well, he nominated me as his next of kin. We were family. I’ve inherited 300 of his paintings. My favourite is one from the war – a view from a rooftop of a block of flats where his parents lived at the end of Kensington High Street, looking towards Earls Court. You can see the barrage balloons in the top left corner. He would have been about 20 when he painted it.

So why do I paint so many businesses?

I moved in to the East End in 1983 – Limehouse, Clemence Street, just off The Burnett Road. Over the years there, and previously in Stoke where my parents lived, I watched whole streets being demolished to make way for new developments. It disturbed me that these individual buildings were disappearing, although my interest in them didn’t, and still doesn’t have a specific social context. I'm not a social activist painter. My interest is purely visual. But that’s linked to the social, isn't it? Because who wants to paint a Starbucks or Costa? They’re all the same. Any of these coffee bars could be anywhere. They lack personal input or content. 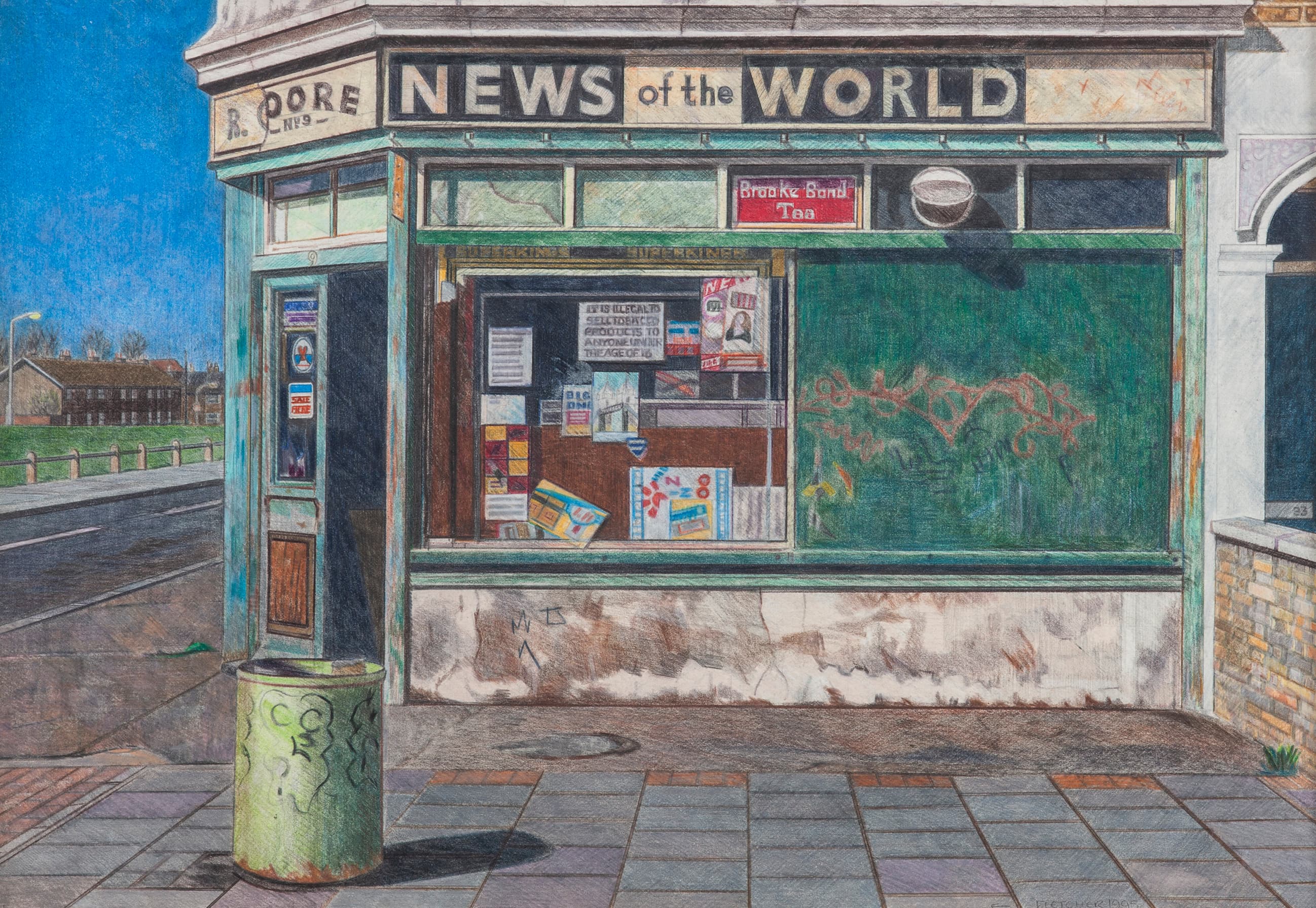 A small café has its own history, a unique flavour that can’t be replicated by a chain of franchises, like the toy shop I was telling you about: these places are... not sacred. That’s too strong a word. But they are very important. I think the stories they tell, whether visual or recorded, written down, should be told. It’s a kind of history – the texture, the pattern, the way that you look at a building; you look at the lettering, you look at the décor and there’s a history there.

People have often told me: “You don’t have many people in your paintings,” but they're wrong. The people are there because you can’t have buildings without human involvement. People make marks, leave traces and it's those that interest me. Sometimes, what attracts me the most is simply the abstract structure, shapes, composition, colour. Back to chasing colours.

Shops are often run by families who’ve been there for generations and sell particular ranges, like the lino shop. Do you know what lino is? Yes it’s flooring, but if I’d asked you that question 40 years ago you’d have looked at me as if I was daft. Now maybe you don't. Because everybody had lino floors then and no one does now. Even language changes along with the businesses. The language found in shop windows. Now they don’t use even lino for garden sheds. 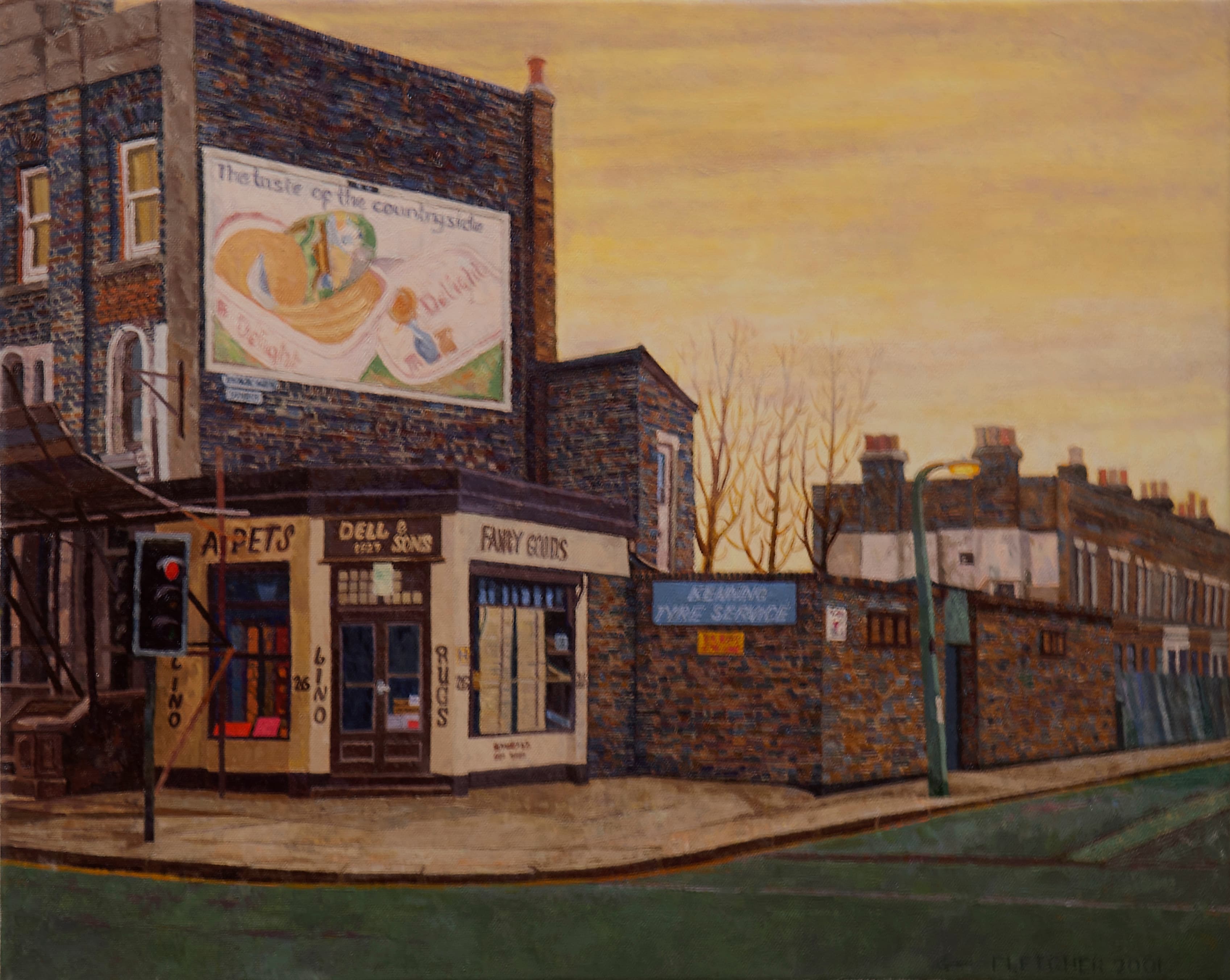 Being anything other than a Sunday painter

32 years after arriving in London, I gave up painting. I was fed up with being poor. Nobody was interested in my work – it had gone out of fashion. Painting was out, conceptual in. Also, as I have said, I am sociable and painting is a lonely solitary activity. Instead I took a job part-time teaching in further education and found that I was good so I accepted a full time managerial position in 2004. That decided it. There was no way I was going to just be a Sunday painter, so I put away my paints.

Not long after in 2007, I found out I had cancer of the oesophagus – my dad had died from the same illness when he was 67 – and the chances of me surviving that didn’t look too promising. I asked my husband Steve to marry me after less than a year of being together just as I was about to start chemotherapy and radiotherapy. He accepted, probably thinking, “My God, what am I taking on?” 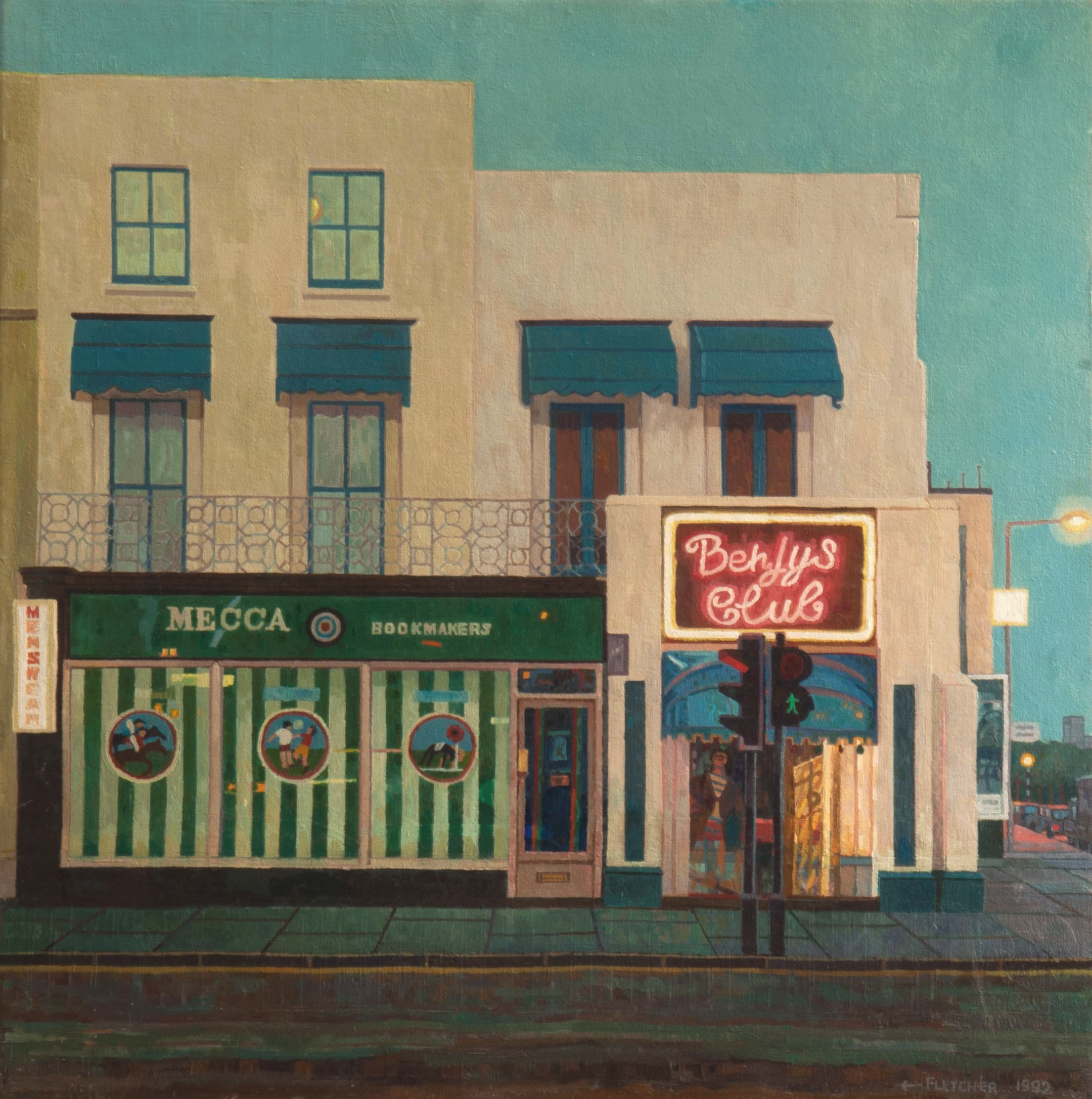 I was off work for a year but I did survive, although damaged. I returned to work and continued as a manager and a tutor, even then not really thinking I’d ever start painting again or even wanting to. But I fell foul of senior management, got a disciplinary – for supporting lecturers rather than colleagues in middle management – so I jumped at the next round of voluntary redundancies before being pushed. But I was still too young to sit in a rocking chair and listen to Songs of Praise, so what could I do? Well, I could paint and now I’m back at the easel.

What else would I do? Having done many in my life, painting is the one strand that has been there throughout, the one element that hasn't changed. I don’t believe in any gods. I don’t believe in religion of any kind. But there is this. Painting these scenes always starts off exciting, thrilling, adventurous even. Every time I think: “this is going to be the perfect painting.” Then something goes wrong, it always does. Then it becomes a struggle. Then it becomes, “Shit, this is awful.” Then, “I’m going to give up on this.” Then there’s a breakthrough again. Then it’s: “It might be okay,” and then it’s: “What am I going to do next?” And then, like the businesses we've talked about, I’ll change scenes and start over again. I think I always will.