Video conferencing and self-streaming tools are offering some businesses a lifeline during the coronavirus outbreak. Here, we talk to organisations who've made the jump and ask for their tips.

We are living in strange and challenging times and all sorts of businesses are being forced to adjust to a new way of working, finding customers and getting their work out into the world. Individuals and companies alike are fast adapting their lifestyles and business models in order to survive – and thrive – in these unprecedented circumstances.

Turning a physical skill into an online skill

JKS England has martial arts clubs across the country, from Nottingham to Norfolk, Harrogate to Oxfordshire. Part a worldwide karate organisation with its headquarters in Japan, instructors at the centres teach Shotokan karate and its members will be seen competing in the Olympics next year.

The lack of face-to-face daily training sessions caused by the coronavirus lockdown has meant a loss of income for the organisation. But JKS England is working to ensure that training continues – albeit in a different format.

As Teresa Withington, an instructor in the north-west is using video conferencing app Zoom to provide instruction – either one-on-one or to groups. Some clubs are making YouTube videos for students, while others are providing technical videos that can be downloaded for a small fee. All the clubs are asking students to pay for the Zoom sessions, either in advance or by an honesty box basis – pay what you can, but nothing at all is ok. “We're conscious that not all families have a steady income coming in and we'd prefer they carry on with their training than stop completely,” says Withington.

The response has been overwhelmingly positive. “Some clubs have had their teenagers students running small sessions, which has received a great response from parents with children who have a lot of energy to burn at the moment,” says Withington. “We've also seen parents, who often sit and watch their children train in the dojo, join in on the online sessions. Mental health is as important as physical fitness right now and online sessions help with both.”

As for advice for similar organisations trying to adjust, Withington urges them to embrace technology.

“We've had hiccups along the way but you have to persevere. Weekly meetings among the instructors at each club and chat groups – on Facebook Messenger, WhatsApp – to share ideas have been pivotal. Keeping up that communication with your students and among all the instructors is really important right now.

These are some of the best solutions to set up video meetings and calls quickly, cheaply and easily.

Zoom brings video conferencing, online meetings and group messaging into one easy-to-use application. It's affordable at every level and allows you to host video conferences of up to 40 minutes for up to 100 participants. Need more capacity? Purchase the 'large meeting' add-on for 500 participant meetings. Meet one-on-one or with large groups and share your screen with them, so they can see what you see.

Skype allows people – from one-on-one meetings, to 50-strong groups – meet over video. Initially designed for voice calls, it's evolved to include video calls and instant messaging. The app is compatible with Windows, Mac OS, Linux, Android, iOS, Xbox, and Amazon Alexa devices. Its Meet Now feature has been widely promoted during the coronavirus lockdown lets you invite colleagues or custoemrs to a free browser-based meeting, even if they don’t have a Skype app.

Used by large corporations and small outfits alike, Google Hangouts is part of the G-Suite collection of business tools. Hangouts lets users send messages, synchronise chats, and take part in voice and video calls of up to 150 people. Powerful and intuitive, it also comes as a Chrome extension and can be used across all the usual devices.

With its doors currently closed due to coronavirus, The Lowry in Salford has launched a new way for people to continue to enjoy culture and remain engaged with the arts centre, which is a not-for-profit organisation and registered charity.

Love Lowry is a daily service of creative activities and art experiences for people to enjoy from their homes.

Julia Fawcett, chief executive of The Lowry, says: “Our visitors engage with us for many different reasons, the escapism of a night at the theatre, a walk around our exhibitions or the joy of taking part in a creative workshop. The Lowry offers so much to so many. The arts have always played a valuable role in people’s mental wellbeing and at a time when social distancing and self-isolation is the new normal, its role is now more important than ever. 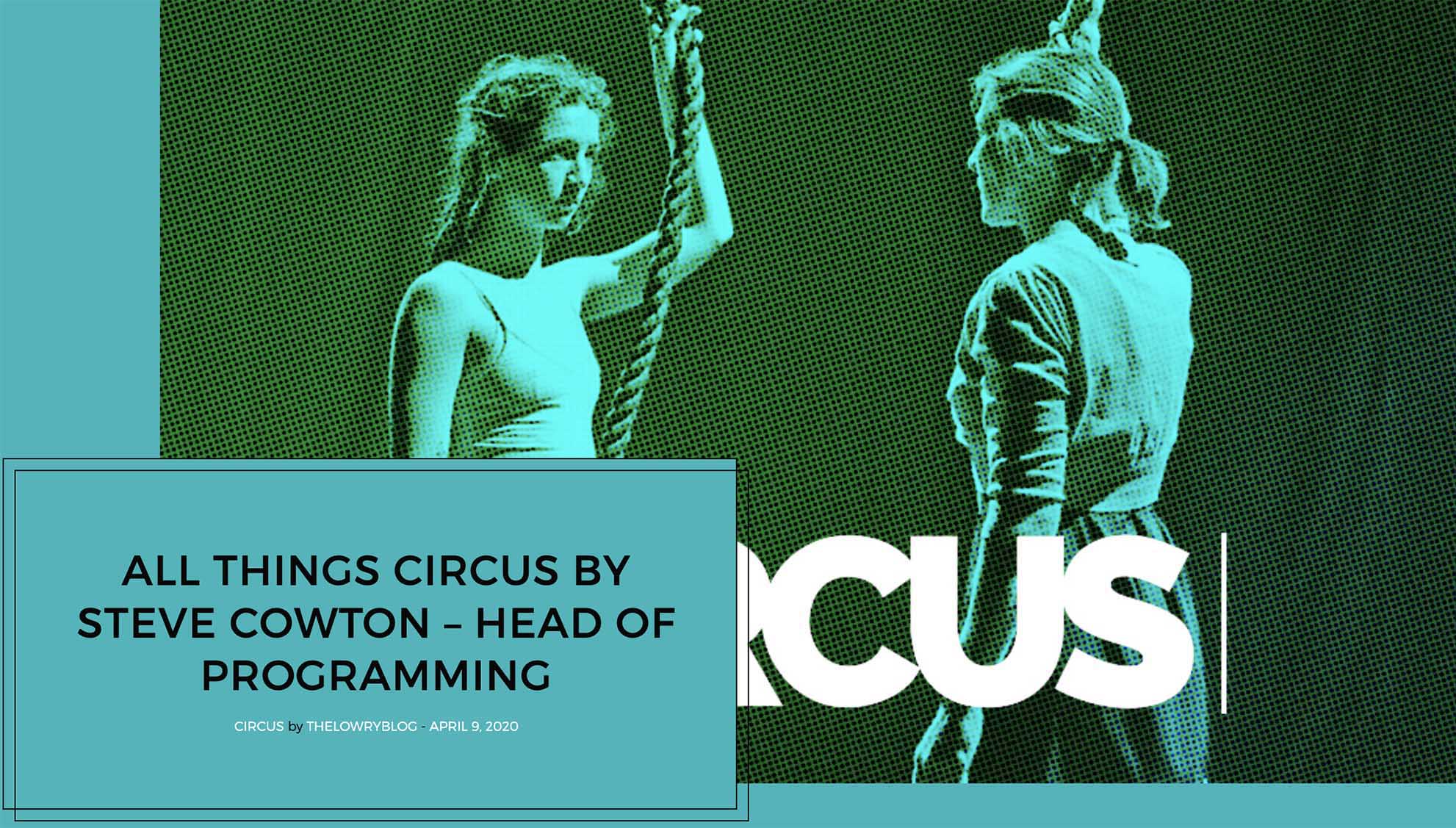 Beyond the Lowry, Northern Ballet, based in Leeds, has released a selection of performances from the company’s repertoire for people to watch at home. Available to stream online or on television as part of the company’s Pay As You Feel Digital Season and include 1984, Little Red Riding Hood and Dracula. The company is also releasing a new dance film, EGO, plus the extended highlights of its 50th Anniversary Celebration Gala which took place at Leeds Grand Theatre at the beginning of the year.

There’s a similar initiative by London's Sadler’s Wells, which is presenting a full-length programme of dance performances and workshops online. While the sessions are free, the company is encouraging people to make a donation to help the company while audiences must stay at home.

To live stream on YouTube, you just need a YouTube/Google account and to “verify” your account on the platform. If you hope to embed your stream on an external site, you'll also need to add an approved AdSense account to your YouTube account. The “Stream now” button is a quick and easy way to start streaming, using a webcam, smart device or internet-enabled camera. You can also pre-schedule a live event to easy promote an upcoming performance or show. YouTube Live also makes content easy to find via Google or other search engines.

Using Facebook Live on mobile devices is really easy. Once you've got an account set up, just open your app and tap “what’s on your mind?”. You can launch a live stream from there. Streaming live on Facebook means you can take advantage of your existing audience, so if you've got good social following, it’s an easy win. The main issue Facebook Live streamers face is that search engines can't find or display Facebook posts or video.

Twitch, like Youtube, is a platform for watching and streaming digital video. It's best known for video game streaming, but has evolved to include streams focused on art, music, sports and niche hobbies. Twitch broadcasts can be watched through its app on all platforms, as well as its website. With a Twitch Account you can stream straight from your phone, tablet or computer. Want to up the quality? Open Broadcaster Software is a powerful software tool that means self-broadcasters can take their shows to the next level.

High performance at home and online

As venues to host classes are closed, High Performance Pilates, based in Oldham, has turned to the internet. According to owner Juliette Watkins – who originally trained as a dancer and spent many years in the circus – the business’ switch to online classes is paying off.

“I arrived home from holiday on 17 March 17 and had to go straight into self-isolation for two weeks because of where I'd been,” she says. “All my classes were cancelled from that point and my income hit zero. I realised pretty quickly that I was going to have to help myself, and that this may have a fairly long term impact, so I decided to look at running online classes. I spent a day learning about Zoom and how that all worked, set myself up and let people know, ran a few trial classes and started teaching properly the following week.”

Not surprisingly, Watkins’ overheads are now lower, but she's also mindful that these are uncertain times and has reworked her pricing accordingly. Class 'attendees' can now pay £7.50 for group session on £30 for a one-on-one class.

“I've also attracted some clients from further afield, which is not something I could have done under normal circumstances,” she says. “Suddenly geography is not a factor. [Teaching online]/ is actually a very interesting challenge. Although I can't correct with tactile cues or move around to see things from different angles, I can still see a lot and make verbal corrections, and they can not only see me but they can see themselves on their screen which can be quite useful. The social interaction is wonderful for all of us. It also adds structure to my day - a reason to get up as normal and get on with my day.”

A number of of her clients are not tech-savvy and are therefore holding off from signing up online, so Watkins is teaching fewer classes than normal. But she says that some clients are now doing more than one class a week which is a change in their previous behaviour.

Meanwhile, she advises similar businesses to be patient. “Don't expect miracles. Keep advertising and telling people about what you can do. The longer this goes on the more people will turn to online options like this.”