Away from the tourism: exploring the businesses of Cornwall's Clay Country

While Cornish resorts boom with 'staycationers', we visit the county's lesser-known old industrial areas, where a range of fascinating small businesses are finding new ways to survive and thrive.

If you don’t live in Cornwall, you could be forgiven for thinking that every successful small business is a pop-up beach bar, street food van or music festival. You might also suspect that to operate a business and make a good living in the county, you need to locate yourself on the coast where the surf is good and the nightlife is vibrant.

Yes, these qualities might stand a new business in good stead, but there is a Cornwall away from the coast, a Cornwall with businesses that aren't built around the tourism industry. There are, for example, enterprises like Eden Reclamation, a quirky salvage yard run by Neil Martin; Cornwall Channel, a startup media company for local news; and George J Hawke & Son's, a village butcher that's weathered more than a century of trading.

These businesses are based in an area known as the Clay Country, a collection of villages just outside of Cornwall’s biggest town, St Austell. The region is so-called because its history was shaped by the discovery of kaolin, a type of clay formed of decomposed granite, in the mid-18th century. Local industry boomed under the ownership of English China Clays, with the material extracted for use in commodities including paper, toothpaste, pharmaceuticals and textiles, then exported around the world.

In the 90s, French-owned Imerys bought the company and its land, but the heyday was over. The industry was in decline and with many of the once productive pits laying silent and scarred by extraction, the area has become ripe for housing development. Which is what is happening a stone’s throw from Neil Martin’s salvage yard, Eden Reclamation.

Martin has been based at the spot opposite Baal Pit, Carluddon, for 22 years and with sweeping views of the sandy Carlyon Bay he has arguably one of the most arresting views in Cornwall. Permission has been granted for 1,500 homes to be built in the area as part of what has been hailed the ‘Garden Village’, with some of that development surrounding the Baal Pit and the yard.

Looming above Eden Reclamation is the iconic conical mound, known as the Sky Tip, created from the spoils of Great Treverbyn Pit, in an area which is also subject to planning permission as part of the scheme. 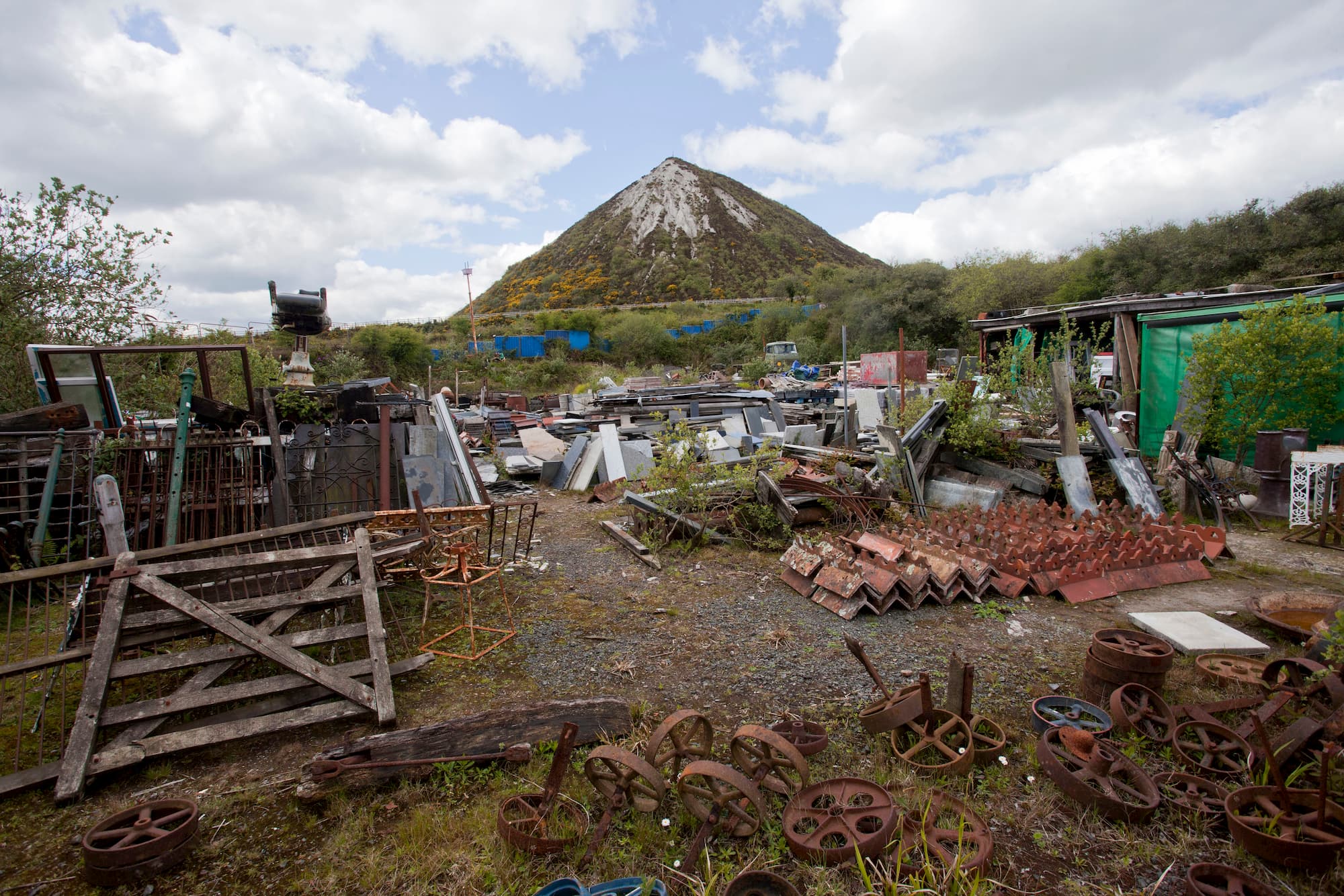 All photography by Tom Last

Martin’s current business is a result of an “adapt and survive” approach mixed with a love of antiquities. Prior to launching Eden Reclamation 15 years ago he ran a car garage on the site, but when a bypass was built and took away his trade, he decided to pivot the business.

“As a result of the bypass there wasn’t going to be a lot of people driving past and looking at cars,” says Martin. “I had an old cottage that I was renovating and so I started buying stuff for that and from there I developed an interest in old architecture and salvage. I began filling the back yard as I was working on cars. I had a lot of the stuff at home as well, and it happened over a phased amount of time." 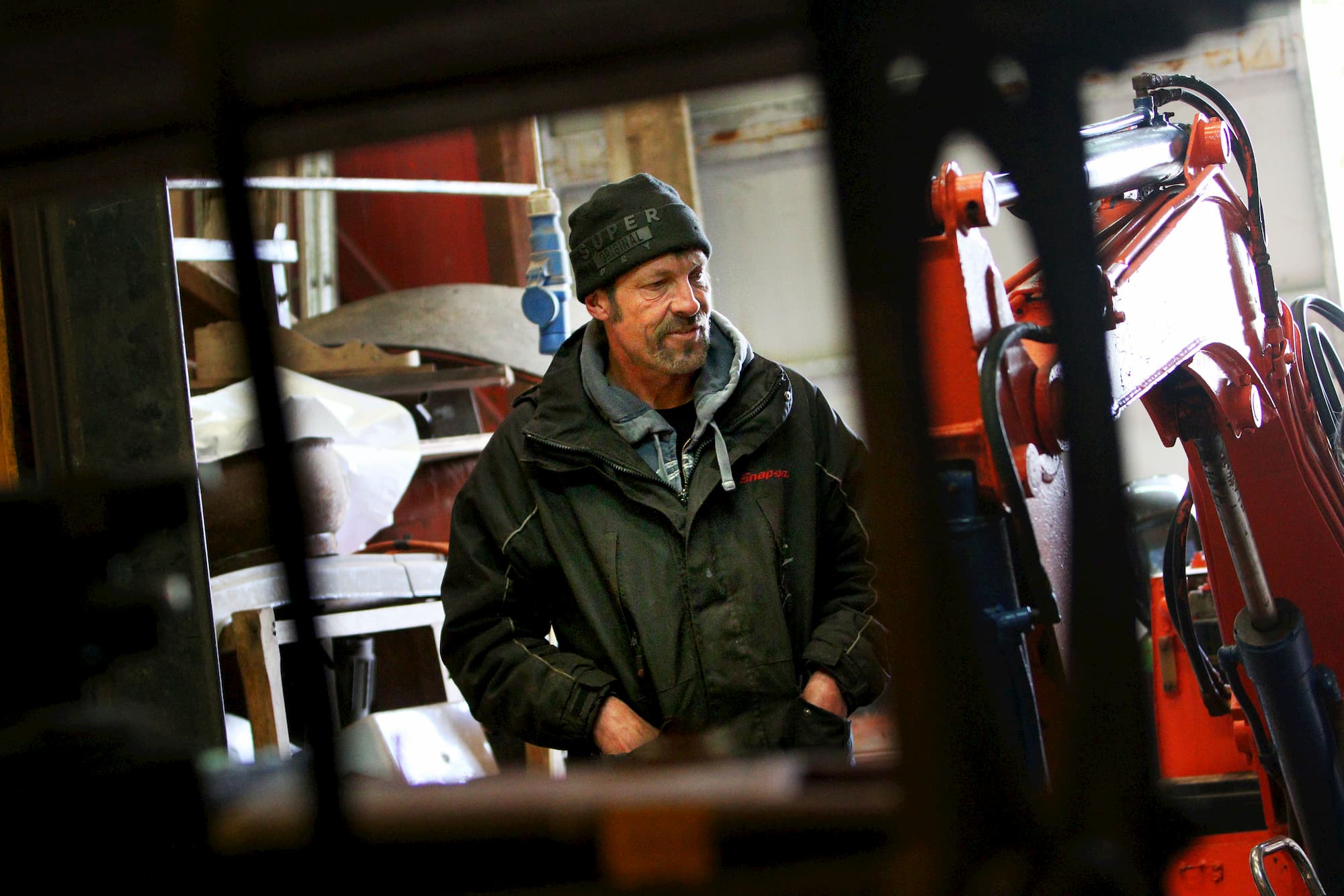 He said that there was just “too much red-tape” to get a small business loan and felt that trying to find support from the council was impossible. When Martin finally switched his businesses he found that launching with a website and having some eye-catching advertising helped.

The pink bath and red telephone box have become synonymous with the approach to the Eden Reclamation yard, which he added: “Perhaps notified a change in the business”.

Martin has created a cavern of curiosities out of rarities, period pieces and odds and bobs for the treasure hunter, architect, DIY-er or historian.

Customers stop to peruse Georgian floorboards, 1960s doors, cast iron fireplaces and a carriage from an old fairground ride. When they meet Martin, whose warm weathered face features lines that tell as many stories as the items he sells, he is able to offer them expert advice that often secure the sale.

“There are certain things that I know will sell,” he says, There are 'must have' items if you’re doing a cottage renovation, such as the butler sink, Delabole slate for the flagstone floor, and stable doors. It’s just what I have got in my property and I find that’s what customers want as well."

“I’ll buy a Cornish dresser just because I still like them,” he chuckles. 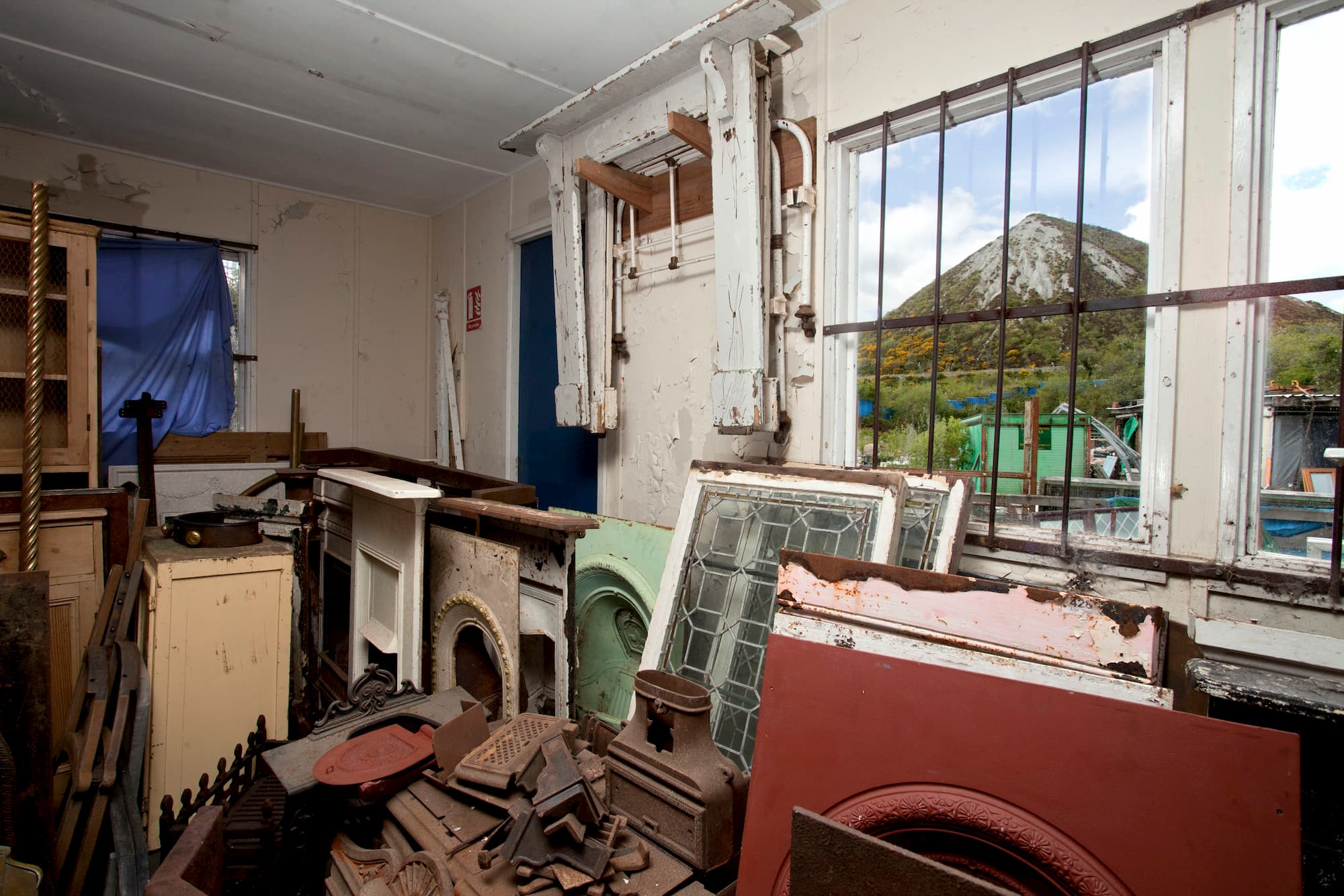 Martin takes pride in his business being part of the community. When a charity box was stolen from a nearby village, he replaced it with a safe from his yard that he bolted to a piece of granite. He also helped replace slate that had been stolen from a church roof.

“I have usefulness to local people," he says. "The business is saving landfill and supports recycling. I’m able to provide kindling to the elderly neighbours."

Martin enjoys meeting his customers, who range from multi-millionaires and tourists to antique dealers. The business got a boost after being featured on television show Salvage Hunters, where presenter Drew Pritchard uncovered a Victorian cast iron fireplace by the British architect Thomas Jeckyll.

But Martin says it’s not easy having to prepare for the next challenge: when the houses start to go up for the Garden Village. Will the yard with its haphazard charm still be welcome when smart houses with immaculate lawns crop up in the local area?

“I’ve had a few sleepless nights, but I’ve always been a fighter and I’ll make the best out of every situation," he says. “I’m not expecting to get rich out of Eden Reclamation but I enjoy it and I get to meet some really interesting people.”

If Eden Reclamation has one foot in the past, another Cornish business is looking firmly to the future. Four years ago Shane Solomon launched the Cornwall Channel, turning a love for film and production into his dream business.

As a teenager Solomon got his hands on his parents' camcorder and made Lego animations and short films. He returned to the camera again in his mid-20s, producing videos of family events and scenic shorts of Cornwall. For a time Solomon divided his time between performing gigs in the evening and honing his filmmaking skills during the day.

Slowly the kernel of a potential business idea was born – an online television channel for Cornwall with a focus on positive news. 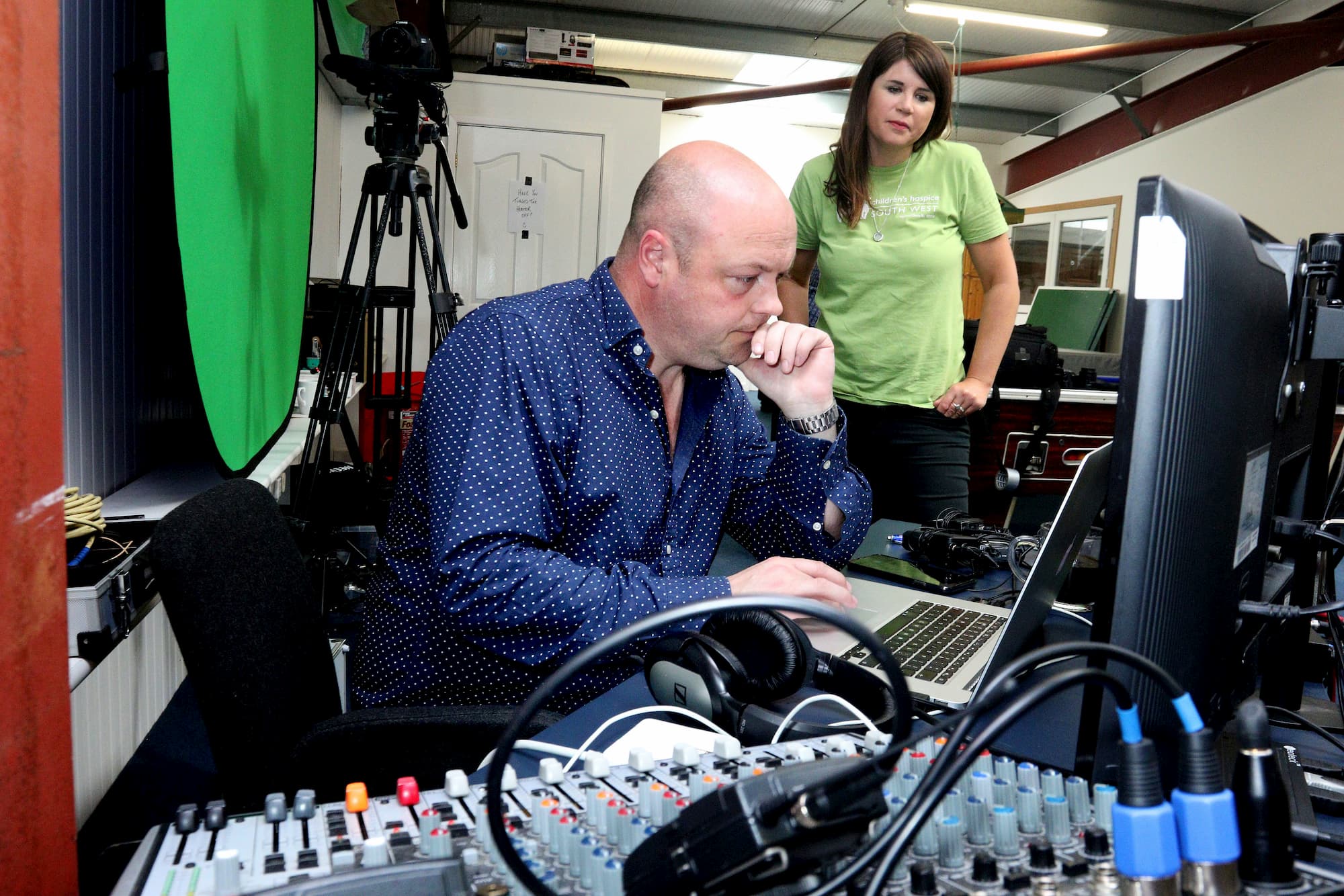 “It was a totally different concept at the time. Nothing else like it existed,” he says. “Once I’d decided that I wanted to do it, I bought a web domain. I was going to call it The Cornwall Channel but then when Mark Zuckerberg dropped the 'The' from Facebook, I decided if it was good enough for him then it was good enough for me.”

Solomon wanted to launch Cornwall Channel, but had no money and felt he lacked the opportunity to tap into financial support to pay for the video production equipment up front. He also wanted to make a traditionally expensive service affordable for businesses.

“I decided to offer pay-monthly video production,” he says. “At the time this certainly wasn’t on offer and it’s still being done very little in video production without a third party finance broker.”

He decided to ask for sponsorship and offered businesses membership to Cornwall Channel, which allowed them to spread the cost of their production of an online video about their business over 12 months, with a chance to renew their subscription after 12 months and update their video. 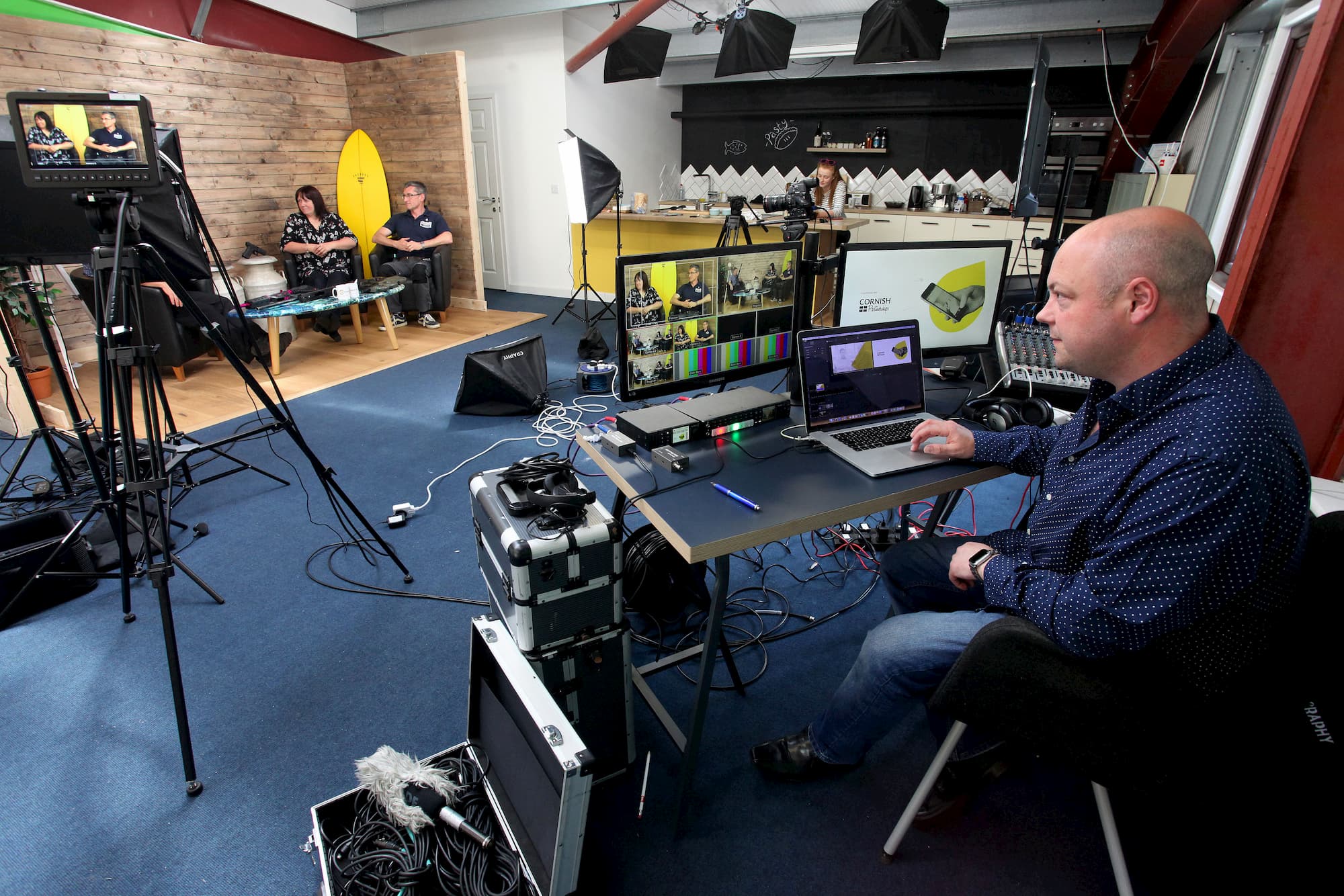 More than 500 businesses have now subscribed to Cornwall Channel, but Solomon says if he was to start his business over again he would look at asset funding. “I wasn’t aware of it when I started out,” he says.

“Everyone always says that the first thing that you need for a business is passion, you should only go into a business that you’re passionate about, because that’s the thing that is going to get you through the tough times,” he says. “But I’d also say it’s important to find a mentor who is offering free advice, listen to what they have to say and apply [their knowledge]/ to your business. I’d also say you’re only going to achieve success by thinking ahead – there’s a great saying which is ‘don’t start your day until it’s finished’, which basically means map out your day and don’t freestyle, or you won’t get anything done.”

Solomon, whose studio is based in the Clay Country, said people underestimate the business boom in Cornwall. “There’s an absolute abundance of talent in Cornwall with business doing extraordinary things.”

The one hundred-year-old business

While the Cornwall Channel is the new kid on the block, fourth generation butcher Robert Hawke is at the helm of the family business George J Hawke & Son in Roche, which has been serving customers for more than a 100 years.

For Hawke it was a business he was destined for. He grew up in and around the shop and inherited it from his mother and father after studying at Smithfield College in London. “It was always in my blood to carry it on and I never considered doing anything else,” he says.

Hawke follows the guiding principle laid down by his forefathers when it comes to running the present day George J Hawke & Son.

“Its wheels within wheels – small businesses supporting other small businesses and keeping it in the area,” he says. “What meat we don’t rear ourselves, we buy as locally as possible, which means we can always trace the origin of it back.” 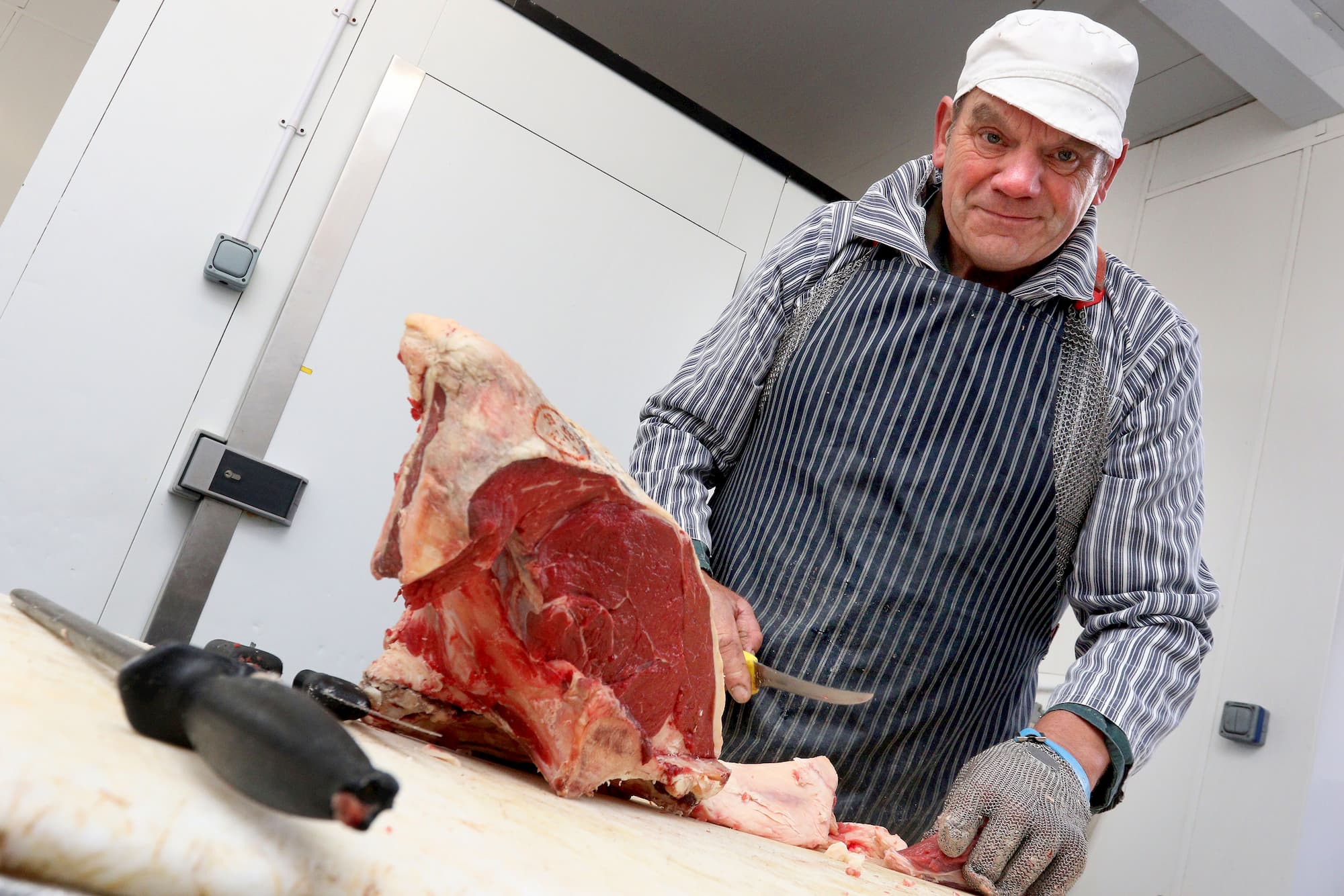 Hawke said that while some things about the shop will remain the same (the hog's pudding, a sausage typical to Cornwall, is the very same family recipe that has stood the time for generations) running a business does mean constantly adapting to meet customers’ needs.

“People’s habits change over the years, their cooking habits and their tastes change,” he says. “People don’t tend to cook from scratch as they once did. We converted where we’d once slaughtered the meat into an area of the shop where we manufacture pasties, beef burgers, sausages and pies. These sorts of things weren’t previously considered quite so much.”

It’s partly the reason why Hawke and his wife Margaret decided five years ago to start breeding and rearing pedigree Red Ruby cattle on their smallholding, which is just a short drive from the shop along lanes fringed with hedgerows and dotted with yellow flowering gorse.

The couple now have a 40-strong herd grazing on lush green grass in the spring air. Margaret Hawke tends to take the lead on the daily feed and calving, calling on her husband if help is required.

“The overarching body for the breed has been very supportive,” she says. “We’re not self-sufficient in beef and we can’t supply all the beef in the shop but it’s wonderful to be able to offer that option.” 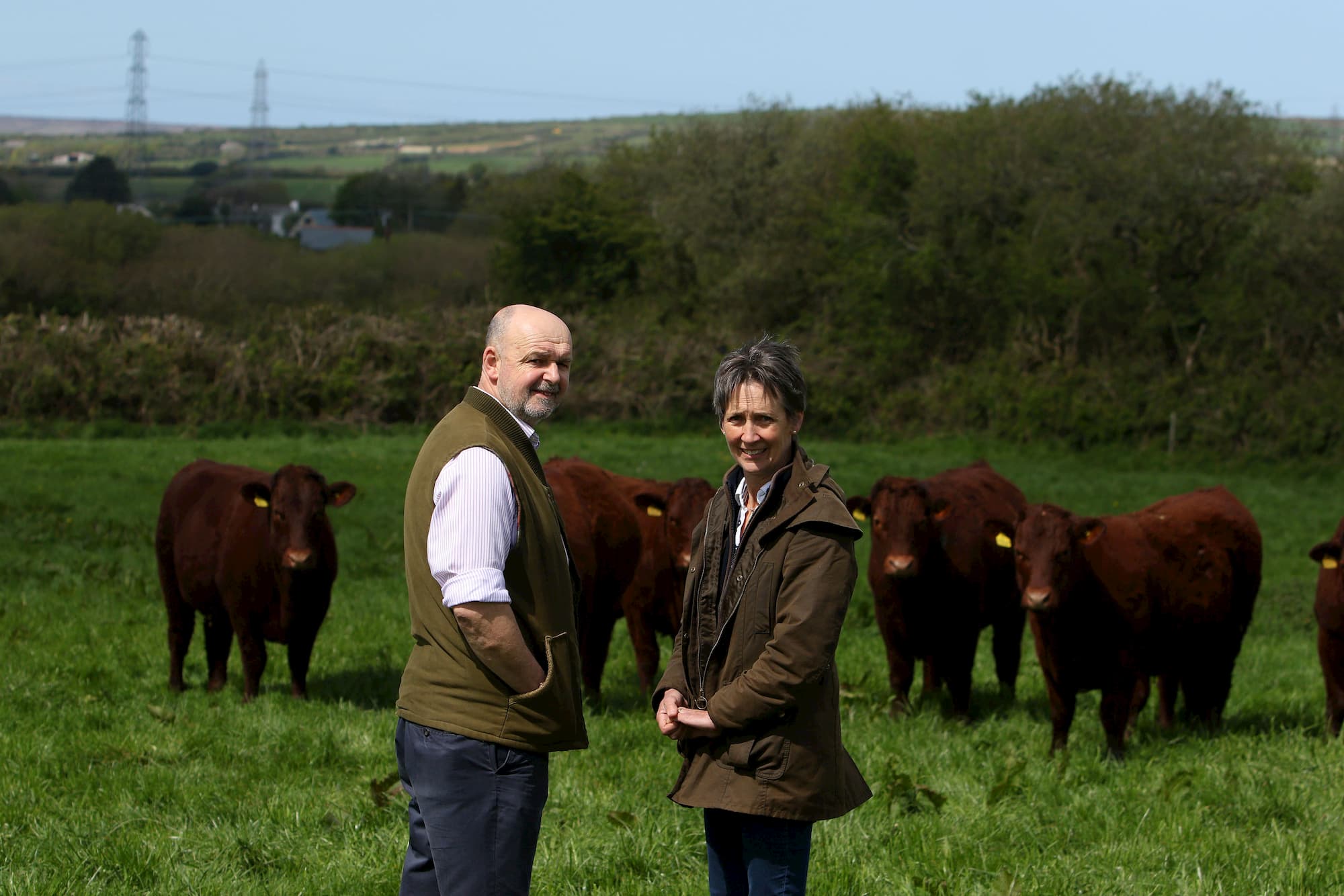 Without a website Hawke’s goes by reputation alone with customers placing orders from as far afield as the Isle of Wight.

“I want to provide a one-to-one service and a friendly ambience, that’s what we try to create. It’s different to a supermarket – you’re able to talk to people, to get to know them, offer them advice, and if they want something particular and let us know, we can produce it for them. That again is all part of the ambience we want to create,” he says. “A business has got to be something you love and it’s a lifestyle for us both, we love doing it. I hope people will always need and appreciate their butcher.”