Jimmi Nicholls and Emily Childs are taking on the big brands with their mantra ‘no rules, just ride’.

Some time in 2014 Jimmi Nicholls went online to buy some new cycling kit. When he came to the checkout he discovered it would cost him £2,000. “I couldn't justify spending that much money even though I knew it was good stuff,” he says. “I wanted to find something that was suitable and I couldn’t, so I thought: well I’ll just do it myself.”

What happened next was a “very long snowball of minor events” as he and girlfriend Emily Childs launched their first collection of cycle clothing that prioritised good design and reasonable prices. “We probably spent two or three years edging away at how can we get it done, what would it look like and what would we want, until we got to: let's put some money behind this, start small and see where we go with it,” he says.

In 2015, Nicholls was working in finance when he first put pen to paper and designed a jersey and shorts that would become Attacus Cycling’s first bit of kit. But the next step – transferring his ideas to the digital page so they could be sent to a factory who would make them – became the first hurdle to getting the business off the ground.

Childs, who was working as a journalist, used the opportunity to refresh Photoshop and Illustrator skills she had learned at university. “So that means we could [design] it but the next phase of that was actually trying to find someone to make it,” Nicholls says. 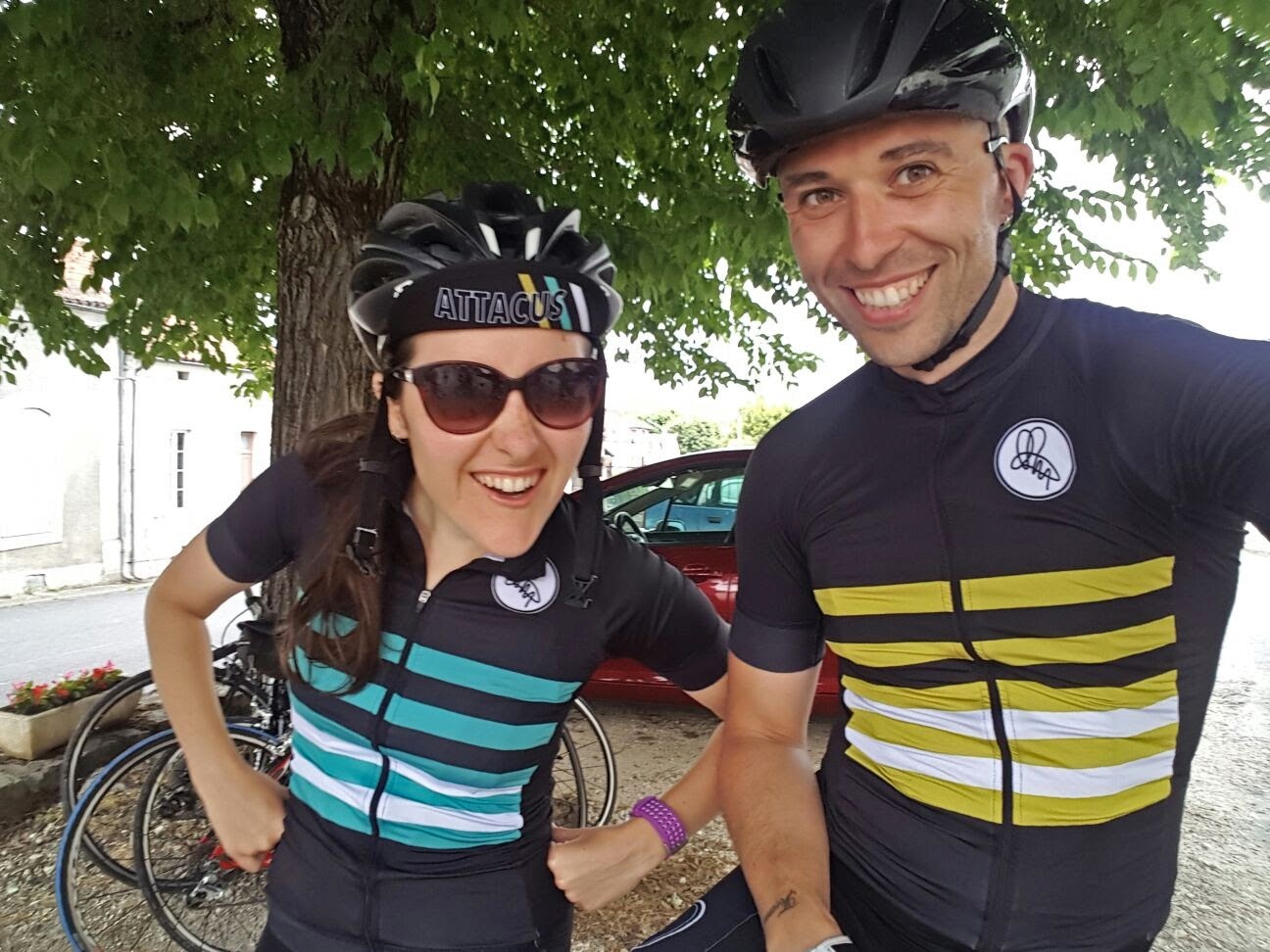 While they were both working full time, the pair put in a few hours ‘here and there’ trying to dig up contacts and find someone who would be interested in partnering with them. They were clear and stubborn about what they wanted, which meant it took months to find someone who was the right fit. “We were having very heated conversations with a lot of factories all over the world trying to get them to make it exactly how we wanted it, rather than how they were telling us we should make it,” Nicholls says.

As they trialled different factories they also realised the project was going to cost them more money than they had anticipated. Their first sample – which would be one of many – cost them £400. Around Spring 2016 they found a factory that was willing to do everything they wanted and they were happy to buy more than a couple of samples. “Numbers were still really, really small,” he says, but he added it was a big milestone that helped him and Childs make the decision to commit to building Attacus.

Nicholls says this was the point they started working ‘crazy’ hours and meant they “basically didn’t see each other.” Childs, who worked evenings until 2am, would use the daytime hours to work on the business before heading to the office. Nicholls would take the split shift; putting in a few hours before and after heading to the office, where he would work on it “as much as he could get away with.”

Finding a customer base

In the initial months, it was friends and a tight knit cycling community who were buying Attacus designs and Childs and Nicholls were trying to save money wherever possible. “Instead of posting stuff I used to deliver our orders directly to people’s offices in London,” Nicholls says. “I had a basket on the front of my bike and I would just load it up with a couple of orders and drop them off before going to work.”

By April 2017, the pair decided it had got to a point where, to give Attacus a chance at growing, they would have to invest even more time. ”It was either that or pay someone else to do it (but) they’re never going to be as dedicated as someone who is setting it up themselves,” Nicholls says. “Plus they’re probably not going to be able or want to do all the stuff that needs to be done” When he finally made the leap from his day job to work on the business full time, his attention immediately focused on fulfilling orders and building its back end. “We had to figure out how to post stuff efficiently, how do we source stock efficiently, how do we do a VAT return without it taking two weeks to do,” he says. 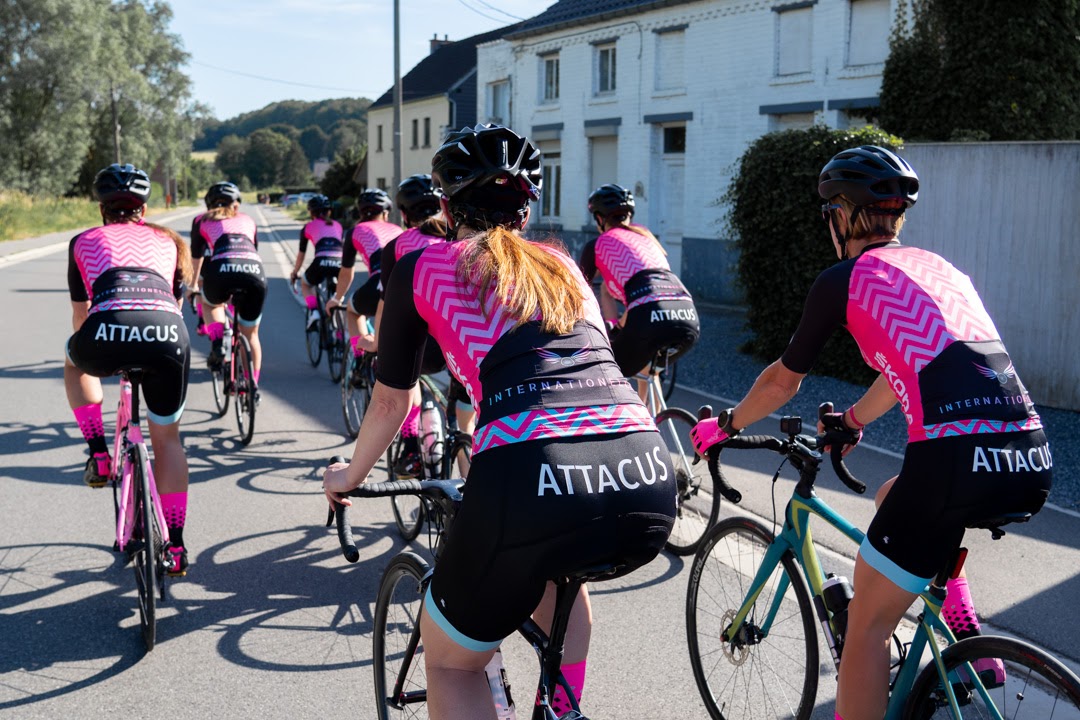 The front end was where Childs took the reigns since her work as a journalist meant she knew how to package content. “She's got an eye for how to present information, tell stories, and also how to identify opportunities where we can get maximum exposure without it costing us very much,” Nicholls says.

One part of building the Attacus brand is telling the ‘behind the scenes’ stories on their blog featuring cyclists, adventurous cycle routes and introducing their new collections. But, where it all started was with Nicholls’ childhood interest: the Attacus Atlas moth. The stripes on the first jersey he designed were partly inspired by the creature, which is one of the biggest moths in the world. It is named because the wings look like an Atlas, which Nicholls and Childs saw as fitting with the kind of brand they wanted to build. “It connected quite nicely with being cyclists and adventuring and getting out there biking,” Nicholls says.

Childs and Nicholls are still a two person team but they now outsource where it makes sense. They have a social media influencer who helps market their products on their YouTube and Instagram by creating videos and photos and pushes them out to his followers. And, while Nicholls has evolved his interest in photography to be able to take professional-looking photos of their designs, they have also have a friend who is a photographer who helps when needed. “In terms of the business side of it we ultimately find a way to do it ourselves one way or another,” Nicholls says. While Childs still freelances, he says by winter, he hopes they will both be working on Attacus full time. 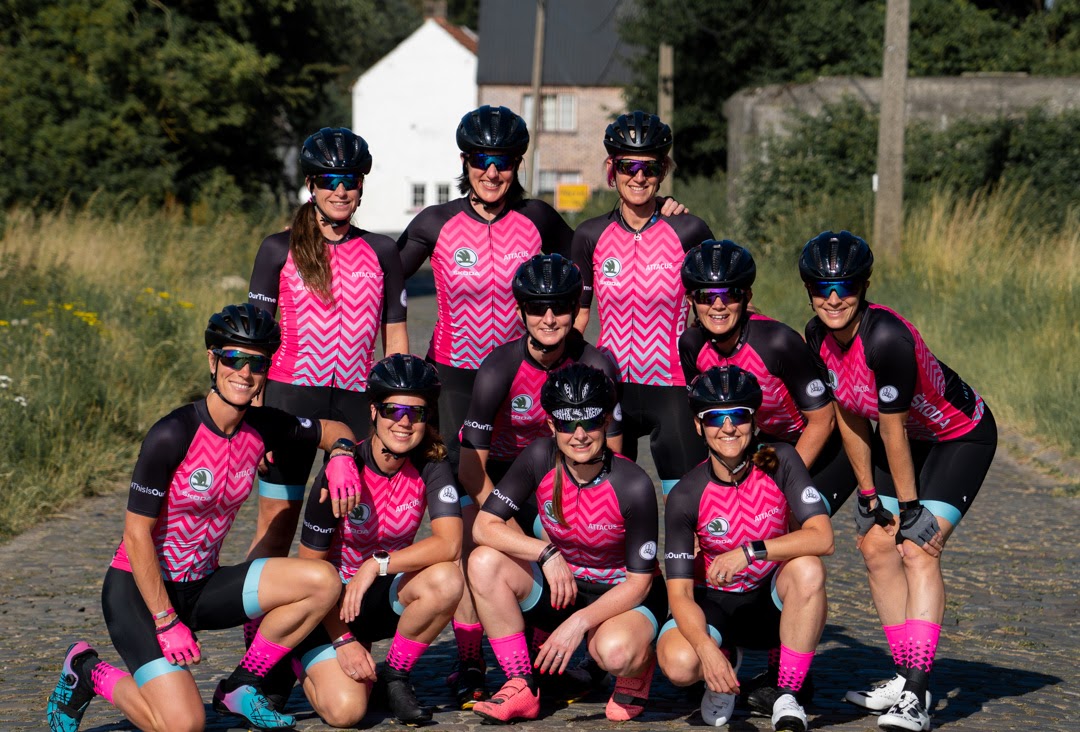 When it comes to reflecting on the years building Attacus, Nicholls says he wishes he knew one thing: just how much money is poured into starting up a business. “Everything starts to add up, before you know it you're spending six, seven, eight hundred quid on an accountant, then there’s the website to build and all of a sudden you’ll have to spend an extra £300 on something else,” he says. “Before you know it you've spent thousands of pounds and that's just to be able to sell something in the first place.”

As they look forward, the pair want to make sure their London-based startup keeps it focus on making cycling more inclusive and accessible while continuing to grow. They made the decision to support the InternationalElles – a group of 10 women who cycled the 3,460km Tour De France. “It's something that we believe in – demonstrating that the women can do as much as the men and deserve just as much coverage as the men,” Nicholls says. “And from cycling perspective, it's PR gold.”